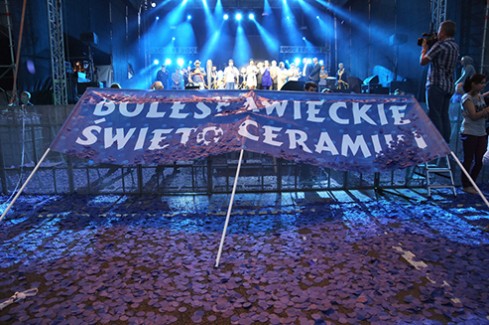 Pottery Capital of Poland – Bolesławiec – invites everyone to the Pottery Festival that will take place on 19-23 August 2015.

The Bolesławiec Pottery Festival is an interactive artistic event whose aim is to promote pottery and Bolesławiec area. During the festival, which will be organised for the 21st time, there will be one of the biggest European fairs with original works of art on sale held. The audience will be able to see open-air pottery kilns built according to the designs of renowned pottery artists and observe the kilning process. In the Pottery Animation Town everyone will be able to take part in making different objects from clay, using a potter’s wheel as well as forming and painting pottery items under the supervision of pottery masters.

Exhibitions will present works by artists from all over the world, including those who participated in the 51st International Open-Air Pottery and Sculpture Workshops.

Everyone will be invited to observe the pottery making process in local manufactures.

Moreover, this five-day event will be accompanied by spectacular shows presented by “pottery people” called Zdobinki, a flea market, excellent dishes and many other attractions. It is estimated that the Bolesławiec Festival is attended by approximately 100,000 people every year.

On behalf of the organisers we would like to invite you to spend an unforgettable family weekend in the Pottery Capital of Poland.

More information about the festival: Polish Pottery Festival in Bolesławiec