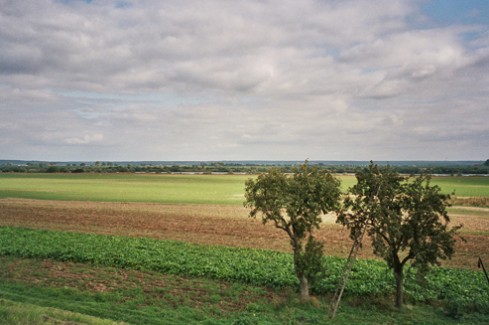 The idea for the Amber Route expedition was born during preparations for a Bachelor thesis. I wrote a thesis about Prague of the Czech Republic, but left the topic for later.

It was not until after  graduation when I designated the expedition route on the basis of a scientific publication. After three months of preparations, full of enthusiasm, I  set off from the capital of the Czech Republic and headed to the Baltic coast on the old trade route from Aquileia. And just like the amber merchants, Celts first, then the Romans, I wanted to go 20 to 25 kilometers a day on foot.

I did not book any accommodations for the planned 1,000 kms in the Czech Republic and Poland, , thinking that I would always find something on  route.  On the first day it turned out that it was not easy to find a place to stay overnight. I had to walk over 30 km, mostly on the road and in the heat. While setting off from  milestone towns,  early in the morning the most important “thought” was: “will I have a place to stay?” The help of children and teenagers who were willing to provide information was invaluable in this regard. Their help in  running to an owner of a small hotel requesting he open it, or even ask for  accommodation with an “aunt”, while the aunt was absent. This was the case in Kawęczyn, where children took me to the barn because “aunt went to  Gdańsk.” It was a little confusing for the neighbours across the street,   who feared that I would set the barn on fire, so they notified the “aunt’s” family. As a result, the neighbours invited me to stay overnight in their home. Several times during the evening, when I asked about possible accommodation and talked about my journey, I was invited to stay in private homes, for example in Yantarny (Янта́рный) in the Kaliningrad region and in Tczew.

At the beginning of the expedition I wondered how my planned route compared with the old one, and how  the amber merchants tackled it. They had many carts full of goods to exchange; and they often had to overcome mountains where the merchandise had to be transferred from carts to pack animals in order to cross the narrow passes. Those merchants walked without maps, often through swamps, dense forests, and not always having a    river to follow. A conversation with Mr. Tadeusz Baranowski was very helpful with this matter. He explained to me that the so-called “Amber Route” led through various paths, but direction was important: from Aquileia to the Baltic Sea on the north-east. Thus it may have happened that when the merchants became lost, they hired local people from villages or settlements along the road as guides through the woods and forests.

Fatigued from walking a few hours, sometimes even half  a day had its effect, and sometimes caused funny situations. For example, once I did not see an additional door in hotel room in Kwidzyn, behind which was a bathroom with shower. But before I arrived at Kwidzyn there was a moment when I decided that I’ve had enough, I’m going back home and giving up the expedition. However, on the following day I ran to the railway station but after two stops I went back on the route, thanks to my colleagues who called and encouraged me all the time.

All inconveniences on the route, such as heat or a few days rain, plodding through the mud, wandering, backpack, which although was light, sometimes gravitated a lot,  the inability to buy water which I drank literally “hectoliters” on the route, were alleviated by  pleasant situations and talks with people I encountered. I met  amber “hunters” in Sambia, where I held freshly harvested amber for a while, which were quite large (I was too impressed to take pictures). After the first trip, those nice moments made me mark other sections of the historical amber trade route. I  set off from Prague to continue the expedition, but this time along the Vltava River in the direction of Linz. Further through Austria, where I received help from Poles living there, and then through the Italy to Aquileia, overcoming a distance of almost 2,000 km.

In the Czech Republic I was treated to water, when I didn’t have a single drop left. Another time, some ladies by the road side  gave me some apples.

In Austria, an owner of a small hotel washed my clothes, or rather my journey “outfit”, which looked like the “before” from the washing powder ads due to the daily walks. Washing machines were sort of a luxury on the route. I carried  amber from Gdańsk just like the merchants, from the place where centuries ago were Danube crossings. Even though I sometimes wanted to throw away the backpack and go home, the smell of freshly brewed coffee in the morning, in the towns of Friuli-Venezia Giulia, gave me strength. I arrived at Aquileia and joyfully “treated” women of the city with amber. In its glory days the Aquileia Romana was the center of trade, amber processing and glass manufacturing. People ventured for the amber called “Baltic Gold” from the eastern part of city, the wharf at the Nastio river – which is connected to the Adriatic Sea.

More information on: the Amber Route and blog

Photos © Mirosława Stroińska. Above: Walichnowska Valley, wide from embankments to the Vistula river.