﻿ Alternative sightseeing in Gdańsk | Link to Poland
Previous Next 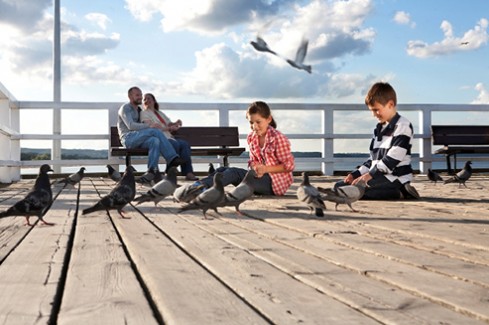 Gdańsk offers many routes which bypass the typical tourist trails. You can follow in the footsteps of medieval and Gothic fortifications, ancient shipbuilding tradition, the Dutch trail, the Jewish trail or the route of G. Grass, Hevelius or Napoleon. You can follow the trail of love and lions, former granaries and magic parks.

It is worth shuffling down the magic streets of Wrzeszcz, Orunia and Oliwa – districts which were not affected by the destructive actions at the end of World War II. Particularly worth noting is Oliwa where there is a beautiful park, and in it Abbot’s Palace and the Cathedral with its spectacular organs whose decorations move while playing. Gdańsk’s attractions are not only beautiful monuments from centuries ago, but also the longest residential building in Poland – a wavy block in Przymorze completed in 1973, more than 800 metres in length. It is also worth seeing the Zieleniak building, visible from the Gdańsk Main Railway Station. It is an imposing building, which was built from… top to bottom. Another idea is to take a trip to the most beautiful zoo located in Poland.

An attractive offer for people coming to Gdańsk is the Tourist Card, thanks to which one can receive rebates for hotels, restaurants, souvenir shops, museums and car rentals. In addition to the Gdańsk Tourist Information Centre, such cards can be purchased at (it) InformationPoints at the Lech Walesa Airport, in the tunnel of the Gdańsk Main Railway Station at Podwale Grodzkie Street as well as the Polish Tourist Association in Gdańsk (PTTK) at 45 Długa Street.

A device that is useful in discovering Gdańsk is the Audioguide Gdańsk system, a pocket electronic guide of the city, for rent at the “it” point at 28/29 Długi Targ Street. The easy to use device allows you to listen to interesting stories, recorded in simplified and expanded versions, allowing people to tour at their own pace. An interesting proposition is free mobile tourist information – gdansk4u MOBILE BluSend. The mobile phone application contains important information for tourists.

A great convenience for people visiting the city is the City Information System, which is a uniform marking of footpaths and roads, important buildings and monuments as well as free wireless internet zones covering the entire Main and Old Town.

A weekend spent in Gdańsk is not enough to get to know this extraordinary city, but enough to love it and return to it.

Gdańsk is the only city in Poland that has been nominated in the competition for the title of “European Best Destination 2017”. You can vote via the portal  VisitGdansk  from 20 January to 10 February 2017.

Photo © the City Hall of Gdansk