﻿ British Icons With Origins in Poland | Link to Poland
Previous Next 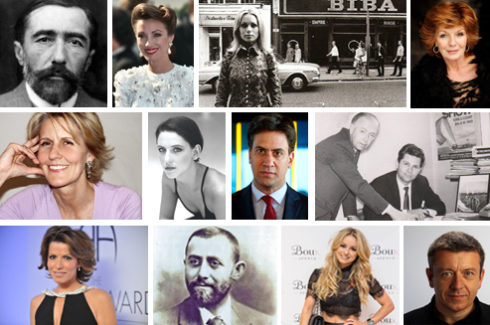 In an increasingly multicultural world, it’s no surprise that many famous Brits have firm roots in Poland. More personalities than you might have thought for sure. Here, we compile a list of iconic Brits hailing from a Polish background or history…

Starting from the top (quite literally), Cnut the Great (Kanut Wielki), former King of England, Denmark and Norway sat on the throne from 995 to 1035. Also known as Canute, he was the son of Gunhildy Polskiej (who was the daughter of Mieszka I I Dobrawy). Once named the most effective king in Anglo-Saxon history, Cnut was well known for his passion for the church.

Another famous personality is Ed Mlliband. A recognised British politician, Ed was born to Ralph Miliband, a Belgian-born Polish man who fled to England with his father during World War II. Edward went on to study at Corpus Christi College, Oxford and the London School of Economics, missing out to David Cameron to become Prime Minister in 2015.

Joseph Conrad is also on the list. Granted British personality in 1886, Joseph (real name Józef Teodor Konrad Korzeniowski) spent many years at sea and is considered to be one of the greatest novelists to pen books in the English language. His works including ‘Heart of Darkness’ and ‘Lord Jim’ have inspired writers from across the world, including George Orwell, Ernest Hemingway and William Faulkner. Even today, he remains a major inspiration to writers across the world.

Anybody who’s spent even a little bit of time in the UK will know that there are two camps: the Eastenders fans and the Coronation Street fans. One particular actress managed a major role in both: Rula Lenska. Born Róża Maria Leopoldyna Łubieńska, Rula is a film and TV star who even appeared on the British version of Big Brother. Believe it or not, Rula’s family are members of the Polish nobility, and bearers of the Pomian coat of arms.

Staying on the subject of entertainment but moving behind the scenes slightly, we’ll move onto London-born Peter Morgan. Morgan’s mother was a catholic Pole who fled the Soviets, and his father a German Jew who fled the Nazis to London in 1933. After graduating with a Fine Art degree from the University of Leeds, Morgan went on to pen plays and films including Frost/Nixon and The Other Boleyn Girl, eventually winning a Golden Globe and an Academy Award nomination in 2006 for his work on The Queen. In 2008, the Telegraph newspaper rewarded recognised him as one of the most influential people.

A figure on this list that may surprise people is Sir John Edward Cohen, born Jacob Edward Kohen, who founded the colossal supermarket chain, Tesco. Born into a Jewish family in 1898, John began working at aged 14 as an apprentice tailor to his father, a Polish immigrant, who remarried when John’s mother died in 1915. In 1917, John volunteered to join the Royal Flying Corps, using his tailoring skills to make balloons and other aircraft. Later, his wife invested her whole dowry to her husband’s entrepreneurial adventures, out of which birthed Tesco with first stores emerging in 1931. The business went on to flourish, becoming the third largest retailer in the world measured by profits.

Another Pole descendant who has made a mark on the high street is Michael Marks, a Polish Jewish businessman who changed the landscape of high-street shopping by co-founding the British chain shop Marks & Spencer. Born into a Polish-Jewish and Belarusian-Jewish family in Belarus, Michael emigrated to England in 1882, eventually settling in Leeds where he opened goods stalls in a covered market before expanding all over Yorkshire and Lancashire. In 1984, he took the business further by approaching cashier Thomas Spencer and the legendary Marks & Spencer was born.

Another famous person, slightly more modern, is Natasha Kaplinsky. Born in 1962, the English television presenter and newsreader was the daughter a Raphael Kaplinsky, whose parents were Polish Jews that migrated to South Africa in 1929. For those who remember Biba, you may also be surprised to hear that Barbara Hulanicki, a fashion designer and the founder of the iconic store, was born in Warsaw, Poland to Polish parents. As well as Biba, Barbara is credited for creating the unique style of Mick Jagger and David Bowie and was appointed an OBE in 2012.

Other legendary fashion designers with Polish roots include Lindka Cierach, a British couturier born in 1952 to Polish-British parents, who counts Helen Mirren and members of the British and European Royal Families as clients, and Tomasz Starzewski who was born to Polish parents. Tomasz counted the Princess of Wales and Baroness Thatcher as his clients.

Maria Grachvogel is another one – born to a Polish father and Irish mother in 1969, Maria counts Victoria Beckham and Angelina Jolie as top clients.

Fans of Strictly Come Dancing may be surprised to know that the professional dancer Ola Jordan was born in Nasielsk, Poland. Prior to making an impression on British television, Ola won Poland’s Open Championships in 1999 for her dancing.

The legendary rock brand Iron Maiden also counts a Pole among their group: Janick Gers, whose father was an officer of the Polish Navy before he came to England and joined the Royal Navy. One of the band’s three guitarists, Janick now lives in the Teesside area with his wife and two children and is a huge fan of Hartlepool United.

Jane Seymour, the beautiful actress, is another famous Brit with Polish roots. Her father was Jewish and born in England to a family from Poland. Mel Giedroyc, one half of the British presenting duo Mel and Sue, also has strong ties to Poland – her father was a Polish refugee during the war and recently wrote a moving memoir about his struggles.

So there we have it – many Brits with Polish roots. Poland should be proud of its achievements, with its people making a mark all over the world either via intellect, creativity or a strong business head. Keep up the good work!

The article is a part of campaign of TransferGo – quick money transfer provider. More about the company available on the TransferGo blog.