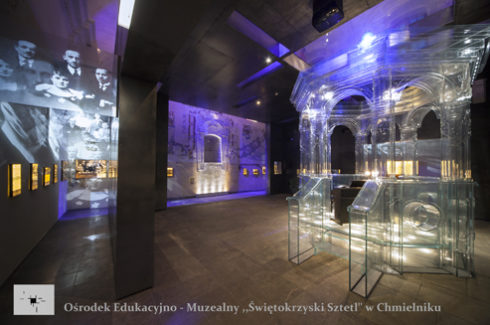 Chmielnik is a town with a population of 4,000, located in the Kielce region in the vicinity of Busko-Zdrój and Pińczów. It is worth to come here for delicious goose and to learn about the “Świętokrzyski Shtetl”.

It is worth to come here for delicious goose…

Chmielnik was once famous for its delicious goose prepared in the old Polish style and hops cultivation, and today it is associated with a dynamic county development, agro-tourism characterized by the typical old Polish hospitality and the meticulous care about the remembrance of the past. It is also known for the shtetl – a small town where the Jewish community consciously chose to settle, an amicable place, which was conducive to a good life and development in the atmosphere of mutual respect and diffusion of two cultures. Echoes of the former coexistence reverberate in the Meetings with Jewish Culture that has been organized annually since 2003 and has attracted a crowd of devoted fans from Poland and abroad.

Nowadays, the atmosphere of the old ages has been revived in Chmielnik with a new dynamic and in a new form that is attractive for contemporary tourists. Changing its image on the Polish and European scale, the town now features a reborn shtetl, while the former synagogue has metamorphosed into the modern Majer Mały “Świętokrzyski Shtetl” Education-Museum Centre.

… and to learn about the “Świętokrzyski Shtetl”

The walls of the former 18th century synagogue that has been meticulously renovated, with the historical layout preserved, now boast a new entity: an interactive museum, which, using the latest display techniques invites the visitors to creating a direct contact with the presented exhibition.

A visit to the museum is not about a simple exploration of the history of the place and taking a look at a number of exhibits and Judaic objects. Instead, it is a one-of-its-kind walk around the pre-war streets of Chmielnik: it is a fascinating journey deep into the atmosphere and traditions of the shtetl, where Poles and Jews had lived side by side for centuries. Furthermore, it is a journey to the shtetl that exists no more in Poland, since shtetls like the former town of Chmielnik were destroyed by the Second World War and the Holocaust.

According to the concept design by Mirosław Nizio, the creator of the “Świętokrzyski Shtetl” project, a visit to the museum becomes an interactive journey through the history of Chmielnik, starting with the time when the Jews arrived there, thanks to the multimedia maps of the region, touchscreens, holographic glasses and hidden speakers placed inside the museum. Visitors to the exhibition will have an experience of being among the trading merchants at the busy Chmielnik market square, or in the house of the family getting ready for the ceremonious Sabbath celebration.

The renovated building of the synagogue has two exhibition levels. The ground floor features the main exhibition room with the glass bimah located in the middle, a conference room, and a multimedia library. The first floor is taken by the stage with the audience seated on the mezzanine (the former gallery for women).

The museum’s main attraction is the world’s only – and therefore absolutely unique – glass bimah, designed as the modernized reconstruction of the former bimah, an elevated platform on which the Torah is read during the services. The bimah in the Chmielnik museum is now used for organized recitals, mini concerts and presentations. This sophisticated construction becomes the focus of attention of each visitor, thanks to the one and only interplay of light on the glass elements.

It is installed in the metal cube, symbolizing a house open to the four sides of the world.

The partially reconstructed aron ha-kodesh – the holy ark, music, sounds of everyday life of the shtetl: children playing, a crowded market place, a Jewish school, stories and memories floating in the air from the hidden speakers, or finally, photographs of the former residents of Chmielnik appearing to the rhythm of footsteps and the maps recalling the location and architecture of the former shtetls in Pińczów, Chęciny, Działoszyce, or Szydłow… – this is the “Świętokrzyski Shtetl.”

Chmielnik is a model example of the diffusion of the two cultures: Polish and Jewish.

The first record of Chmielnik mentions the battle that the Polish knighthood lost to the Tartars in 1241. The owner of this land, Jan Oleśnicki, obtained a town charter for Chmielnik in 1551 from King Sigismund II Augustus. Both the town founder and its subsequent owners were the supporters of the Reformation. In the 1580’s Chmielnik was one of the most significant centres of Arianism in Małopolska. This is where the councils, attended by the most important Arian theologians, were held. The brick Church of the Holy Trinity (16th century) is the oldest historical monument in town. The present Baroque Parish Church of the Immaculate Conception of the Blessed Virgin Mary was built in the 18th century. Jews had settled in Chmielnik since the 17th century.

In 1630 Krzysztof Gołuchowski, the town’s heir, issued a privilege permitting the Jews to settle, build the synagogue and school, and to trade. The synagogue was built in the 18th century and was the third largest synagogue in the Kielce region.

Until 1939 the Jewish community of Chmielnik constituted 80 percent of the entire population. Polish and Jewish communities were connected by everyday neighbourly life and lively economic contacts.

Throughout the centuries, both cultures, languages and customs influenced each other. The extermination of the Chmielnik Jews began in 1941, with the first stage being the establishment of the ghetto, then followed by its liquidation. It is estimated that until March of 1943, the Nazi Germans murdered or deported to the death camp in Treblinka about 13,000 Jews (pre-war residents of Chmielnik and Jews resettled to the Chmielnik ghetto from other towns).

Arriving: Chmielnik is located at the intersection of Route 73 from Kielce to Tarnów, and the route from Staszów to Jędrzejów, between Kielce and Busko-Zdrój, 35 km south of Kielce.

More information you can find on: Świętokrzyski Shtetl