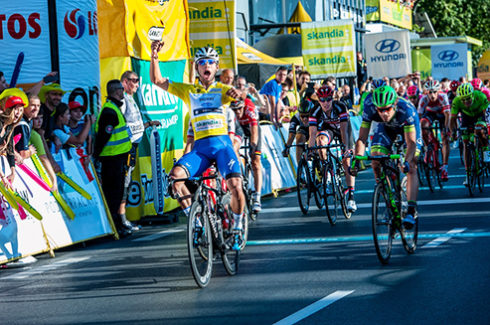 With the fourth stage from Nowy Sacz to Rzeszow/Podkarpackie covering 218 km, the Tour de Pologne made it through the first part of the 2016 race. It’s an edition that up until now has seen the jet men dominating, with 4 final bunch sprint arrivals in just as many fractions.

Before the start the group observed a minute of silence in respect for the tragic events in Nice last night. Today the riders had many kilometres to face once again. From the very first pedal strokes a breakaway of 7 riders lit up the stage: Italians Alessandro De Marchi (BMC) and Alessandro Tonelli (Bardiani CSF), Belgian Jens Keukeleire (ORICA-BikeExchange), Russian Igor Boev (RusVelo),and Poles Adam Stachowiak (Verva Activejet), Jaroslaw Marycz (CCC Sprandi Polkowice) and Szymon Rekita (Polish National Team). They gained a maximum advantage of about 8 minutes. The attackers worked together up to 60k out from the finish line, when De Marchi (BMC), Tonelli (Bardiani CSF) and Marycz (CCC Sprandi Polkowice) managed to build an edge on an uphill stretch. The last of the trio to surrender was the colour bearer for team BMC, who got reeled in at the entrance to the final circuit.

In the last 10 km a succession of surges and counter surges spread the group out, but it all came down to the final sprint, just like in the first three fractions. Fernando Gaviria struck again and won decisively on the finish line in Rzeszow/Podkarpackie. Thus Team Etixx – Quick-Step has scored a triple play. Fernando Gaviria held on to the Skandia yellow jersey as leader of the GC and recaptured the Hyundai white jersey as best sprinter. Another big star of the day was also Poland’s own Michal Kwiatkowski (Team Sky), who was third at the finish line and second in the general classification. Starting tomorrow the roads will start to climb. In fact, the Tour de Pologne will head ZaKopane, an essential trial that will test the shape of the men in the classification and help give an idea of who might be the winner of this 2016 edition.

“It was a great first half of the Tour de Pologne for me and my team with three wins and the yellow jersey, but of course the next two stages are really gruelling and i twill be difficult to keep the leader’s jersey,” declared Gaviria. “The Tour de Pologne has been a really hard race for me so far because there have been no teams that can control the race, so we have to work hard every day to keep the jersey, and for the stage. Was I surprised that Kwiatkowski could sprint for 3rd place, because he is not a sprinter? But hes a world champion and a world champion is always a great rider so I guess I am not surprised.”

“Yea of courseI was up there in the last lap thank you to my teammates that protected me and I was able to take bonification seconds on the sprints which is extra 3 seconds: always a bonus if you think about GC,” declared Kwiatkowski. “About the sprint, all I can say is that I’m not able to fight against Gaviria or Luca Mezgec they are great sprinters you know and I surprised them with a quick attack from the back about 400 metres before the finish line I accelerated and I went double speed and I am happy to finish on the podium in front of the Polish public. From what I have heard, it’s really bad weather for the weekend so thats going to be a really tough stage. The stage to Zakopane I really struggled a lot with in the past years and I know that its a crucial stage for the GC, as well as the stage on Sunday, but we will keep on fighting. I know that we have a really good team with Nicholas Roche and Leopold Konig and we will be up there in the GC.”

The Tauron cyclamen jersey for best climber passed to the shoulders of Alessandro Tonelli (Bardiani CSF), while the Lotto blue jersey for the most active rider in the group stays with Jonas Koch (Verva-ActiveJet). The Team classification is being led by Etixx – Quick-Step.