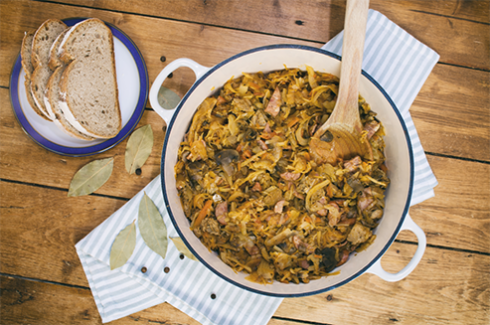 Pierogi, bigos and kiełbasa – these words no longer sound foreign, as Britons become increasingly more familiar with the Polish cuisine. According to Mintel, a tenth of the population inhabiting the British soil now eats Polish foods, and the trend is bound to grow as the products’ availability sparks a new fashion, where dishes originating from Poland enjoy a renaissance of popularity similar to that of the Indian or vegetarian cuisine in previous years.

According to Mintel, a tenth of the population inhabiting the British soil now eats Polish food, and the trend is bound to grow as the products’ availability sparks a new fashion, where dishes originating from Poland enjoy a renaissance of popularity similar to that of the Indian or vegetarian cuisine in previous years.

A fashion that was anticipated for

This is largely due to relentless efforts from Polish businesses based in the UK: despite the initial post-Brexit anxiety, immigrant entrepreneurs now look forward to the future as they note heightened demand for their local food products. They are well-prepared for the era of prosperity that is to come in the following months: Polish dishes already constitute a significant landmark on the British gastronomic landscape, with over 700 Polish stores strategically deployed around every corner, well-established Polish shelves in the Big Four supermarket chains, and a plethora of restaurants and food trucks in the renowned entertainment districts, including London’s Camden.

But Polish businessmen do not rely solely on the wide availability, familiarity and convenience to satiate Britons’ newfound appetite: now that the distribution is secured, they actively look for measures to introduce new products – and new occasions for consumption. You may have noticed the ubiquitous commotion on the last Thursday of February, as locals and immigrants alike were storming the stores, each leaving with an armful of pączki, traditional doughnuts filled with jam and coated in sugar icing. That was a typical celebration of the Fat Thursday: a Polish holiday marking the commence of the last week of Carnival that has recently become a hit in the United Kingdom. Polish bakeries had been working full-swing during the weeks before to ensure the event’s success, but the effort clearly paid off: Polish Village Bread reports that on that day alone, they sold over 260 000 donuts across the United Kingdom. The company’s marketing manager, Katarzyna Grabowska, commented on this recent success: “Britons love Polish pączki. It may be due to the fact that they are different to traditional doughnuts, more light. We also noted the uptick in demand for other Polish products included in our offer, such as bread and cakes. From year to year, the circle of British people who enjoy them grows larger; it was a huge positive surprise to have received more orders for our birthday cakes for British parties. Whenever we expand our customer base, we strive to meet their expectations and adjust our offer to their tastes, but we never drift away from our traditional Polish recipes, which are winning the British market.”

The pleasure of eating out

The new culinary trend has a larger scope: its impact is reflected not only in the shopping habits, but also on leisure and entertainment. This spring will abound in outdoor events where the Polish cuisine is one of the main items on the agenda, starting with the Days of Poland Festival, the biggest Polish event in the United Kingdom, whose fourth edition is scheduled for 30 April 2017. Extremely popular since the dawn of its existence, it attracts both Polish community representatives and local Londoners, enticing them with a myriad of food stalls offering fresh dishes of all kind, from luscious hot meals to sugary desserts and baked goods, each prepared in accordance with traditional Polish recipes. The participants are presented with an opportunity to taste the culture of Poland – both literally and lyrically, as the programme consists of multiple performances held by prominent artists from different regions of the country. With the free entry and the promise of great food and great fun, the Festival is expecting a record attendance, and is inviting everyone – especially those who are yet to taste Polish delicacies.

Read also: Days of Poland – the biggest Polish Festival is back in London