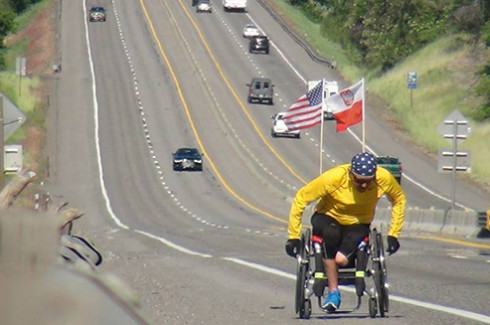 A disabled athlete, Janusz Radgowski will undertake his Pacific-Atlantic ‘super- marathon’ in an active wheelchair raising support for a two year old child, suffering from a brain illness. Zuzia was born with a complex genetic brain condition that severely affects her vision and physical development. Constant therapy and medical care is needed to help her develop a normal life.

Janusz Radgowski’s Pacific-Atlantic route in a wheelchair began in Seattle on May 2, 2016 with a great support of local community.  His journey in Washington State will consist of 20 days of travel, continuing into Idaho, North Dakota, South Dakota, Minnesota, Iowa, Illinois, Indiana, Ohio, Pennsylvania, Maryland, and Delaware. He plans to travel over 3 thousand miles, crossing 12 states in 6 months and ending his journey in October 2016.

Previously, Janusz has completed a wheelchair marathon from Rome, Italy to Wadowice, Poland in 2015. His ‘super-marathon’ in the United States is a challenge with enormous proportion and he is determined to succeed.  During his trip, he is accompanied by a van with technical and communications support.

If you live in US and you would like to support Janusz Radgowski during his marathon in any way, head on over to Pacific-Atlantic website and check the route for updates.