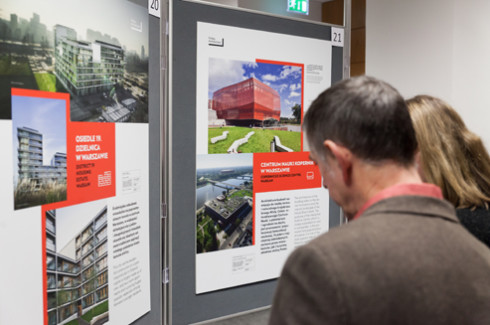 “Polska. Architecture”, an exhibition organised by the Polish Embassy in Dublin, opened at the Representation of the European Commission in Ireland on 24 November.

The aim of the exhibition is to present the most recent achievements of Polish architecture to the Irish public. Its viewers especially liked the Polish National Radio Symphony Orchestra building in Katowice, known for its dark walls resembling rolling waves and the unusual amphitheatre layout, as well as the Silesian Museum, built on the site of a former coal mine.

Beata Tylec, an editor of the Architektura-murator magazine, was invited as a special guest to talk about post-1989 Polish architecture and the buildings displayed at the exhibition.

The event was attended by figures from the world of architecture, design and photography, ambassadors of Croatia, the Czech Republic, Germany, Hungary and Switzerland, and a European Commission representative in Ireland.

The hugely successful exhibition will travel to Cork, Limerick and Galway in Ireland, thanks in part to the support of the Polish Embassy in Dublin.