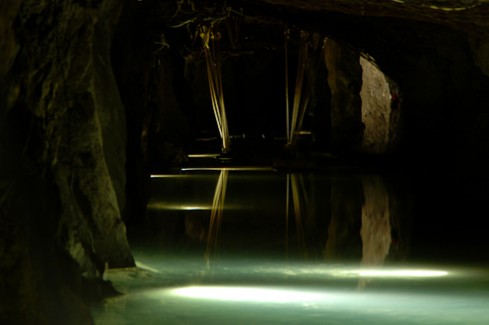 In our series “Summer in Poland” we present today: Mysterious Underground Town Głuszyca – the Osówka Complex – the last, the main, the largest, the most complex of Hitler’s headquarters constructed in Lower Silesia.

Osówka Complex is located within the administrative boundaries of the city Głuszyca, in Wałbrzych County. It is the most interesting and the largest, open to public, complex built in the Sowie Mountains.

The construction works commenced there in the middle of 1943 and as its result, a system of huge concrete corridors, reinforcements and halls were created.

The construction had a codename Riese (Giant) and it was one of the biggest undertakings of the Second World War. The aim of those works was a closely-guarded secret. According to some researchers it was supposed to be a secret and bombproof quarter of Adolf Hitler, with a maximum capacity of 20-40 thousands of people, including: commanders, ministers, staff and body-guards. However, the others maintain that the halls were built for underground armament factories producing the secret weapon or chemical, biological or nuclear laboratories; or as research institute or manufacturing plants for the objects of vertical take-off, powered, among others, antigravity engine.

The aboveground part of the complex Osówka is an external infrastructure of the underground buildings. The progress of works that have been done here put this building in the first place in terms of the most completed aboveground buildings of the project Riese in the Awl Mountains. The most eye-catching are two objects conventionally called “officers’ mess” and “power station”. The “officers’ mess is 50 meters long. It has window openings, monolithic concrete ceiling, flues, plumbing tube and inner insulation made with chip and cement board. The ceiling is made in the form of basin, which was ultimately intended to fill with soil and vegetation. The “power station” is a concrete block, consisting of containers and rooms to which lead manholes with the steel holdfast.

It is worth to go those unique underworlds in the region of the Owl Mountains. You can choose from several options of hiking trails:

– Extreme (about 1.5 hours) for the vigorous people, the sightseeing of the Underground City is connected with sailing an assault craft and going the pavement for treasure hunters

– Expedition Riese (about 3 hours) the longest and the most complex tour to sightsee the underground and above ground parts of the Osówka complex. Excellent choice for the bonding events or active tourists

–  Educational (about 2 hours) prepared especially for children; Mysterious Underground of Głuszyca City – Osówka Complex is available for the tourists for the whole year

In the complex there are also a restaurant and a conference room for 20 people. There is a possibility to organize some special events, trainings or conferences.

Mysterious Underground of Głuszyca City – Osówka Complex, as the most interesting attraction of the region has received many awards and distinctions among others from Polish Tourist Organization, Chapter Certification System of Touristic Products in Lower Silesia DOT and in the competition of the Internet users named The Pearl in the Crown of Lower Silesia.