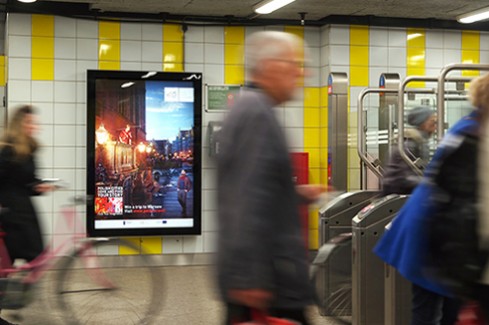 Over 150 billboards, nearly 200 advertising banners, and several megabillboards are promoting Poland in the largest cities of the Netherlands. The largest outdoor campaign in the history of the Polish Tourist Information Centre (PTIC) in Amsterdam is going to last for several weeks in September and October. The campaign is conducted in many cities, including Amsterdam, Rotterdam, Utrecht, Almelo, Groningen, and Eindhoven.

‘This is, undoubtedly, the biggest outdoor campaign promoting Poland in the Dutch market,’ emphasizes Dominika Szulc, Manager of PTIC in Amsterdam. ‘Its central theme is the watchword: Polska. Come and find your story.’

The billboards and advertising banners promote Polish cities and winter in Poland. The billboards are designed in winter shades and feature a beautiful photo of a horse and cart against the background of a majestic castle. The banners, which can be seen, among other places, at Amsterdam underground stations, promote Polish cities and a competition with an award of a trip to Warsaw. The billboards promoting Poland have also been placed at the main entrance to Utrecht fairs, where “50 Plus Beurs”, the largest fair for seniors, was held in the middle of September (100,000 visitors; 600 stalls and presentations). The campaign is possible owing to a subsidy from the European Union funds.

‘At first, the campaign was supposed to include four cities: Amsterdam, Rotterdam, Utrech, and Eindhoven. However, thanks to a great cooperation with Clear Channel, we have managed to expand free of charge to additional cities, i.e. Almelo, Arnhem, and Groningen, as well as a few smaller towns, including Assen, Dronten, Rijnwoude, and Gouda,’ said Andrzej Pawluszek, Deputy Manager of the Amsterdam Centre, who is responsible for the campaign.

Clear Channel representatives are also satisfied with the campaign. ‘It is a great tool for promoting Poland in the Netherlands,’ says Marleen Gras from Clear Channel. ‘Carefully selected locations will make it possible for the message to reach a wide group of people. I am convinced that this will result in an increased interest in Polish tourism among the Dutch,’ emphasizes Gras.

The autumn campaign is correlated with the promotion of Polish cities on the website of the largest daily “De Telegraaf”, where advertising banners promoting Polish cities are published. The campaign is also accompanied with an online competition, where participants may win a trip to Poland, and a tram with an advertisement of Poland running along the streets of Hague (until the end of January 2014). In addition, a special newsletter was sent to over 220,000 e-mail addresses via the popular web service wineenreisnaar.nl.

The figures confirm an increased interest in tourist qualities of Poland among Dutch tourists. In 2010, over 330,000 Dutch people* visited our country; two years later, these levels increased up to almost 400,000. Paradoxically, the crisis works to our advantage, as economical Dutchmen regard Poland as a country which is cheap, located near home, and quick to reach. According to the Marketing Strategy of Poland in the tourism sector for 2012-2020*, the main target groups of promoting activities conducted by PTIC in the Dutch markets include young and elderly people (50+). It is these groups that are targeted by the autumn promotion campaign.

* Data provided by the Tourism Institute