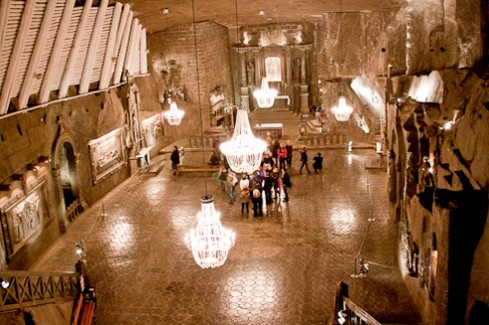 What does chives ice cream taste like, why do students in Wroclaw commute by cable car, or what is the world’s deepest underground church made of – these are just some of the interesting and little-known facts about Poland that featured on CNN in late 2013.

As part of the On the road: Poland series, CNN journalists explored places and people with passion, who are redefining Poland as a modern country that occupies a special place on the world map. The Poland-themed documentaries were aired in November.

In one of the episodes Wojciech Amaro was trying to reinvent Polish cuisine. In April 2013, his restaurant became the first in Poland to be awarded a Michelin star. The famous chef serves traditional Polish dishes in new combinations, and has invented e.g. chives ice cream.

CNN journalists argue that Poland is gathering momentum at different levels, but continues to cherish its traditions. They “descend to the depths of Polish history and faith” and visit Wieliczka salt mine to show the world’s deepest underground church.

They present the Museum of the History of Polish Jews in Warsaw, whose very architectural design is symbolic  – “inside it’s all about the rupture, the divide that lets light in.” They also discover other amazing sites and interesting Poles.

We encourage you to watch the “On the road: Poland series”.

Source: Embassy of the Republic of Poland in Bratislava