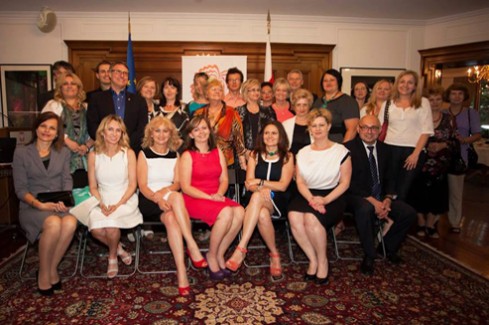 Polish-Canadian Education Centre has been launched. Newly created Polish diaspora organization shall act primarily for the sake of integration between Polish and Canadian environments. The founders’ objectives are to include in their initiatives not only Polish diaspora but also Canadians.

Polish-Canadian Education Centre is a non-profit organization, acting in the territories of Poland and Canada. The organization was initiated in April 2013 by Iwona Malinowska, the founder of Polish Language School for Adults in Mississauga. PCEC is the continuation of the activities of Iwona Malinowska, who for two years in succession handled in cooperation with Fahrenheit Center the promotion of universities and the organization of Polish Universities Fairs in the territory of Canada.

Although PCEC has been only starting its activities, it is founded by persons with multiple years of experience in the field of education, the cooperation with the diaspora, the university becoming more international and the organization of events and wide – scaled promotion.

From the beginning of its activities, the organization accepts as prioritary targets: to integrate Polish and Canadian environments, to support Polish universities and to promote Polish culture, arts and science amongst the youth. These activities are oriented both at the Polish diaspora and at other ethnical groups which reside in multicultural Canada.

The main tasks of PCEC include:

– to recruit students from Canada to Polish universities

– to organize meetings with interesting personalities from the world of culture, arts and science

The opening ceremony was held on 14th June in the Consulate General of the Republic of Poland in Toronto and was inaugurated by the Consul, Grzegorz Jopkiewicz. In his address, the Consul emphasized the education activities of the Centre and the importance of programs which would be implemented by the PCEC founders.“Poland has never before been so open to the international cooperation, in education included, and has never had so advantageous conditions – the Consul, Grzegorz Jopkiewicz emphasized during the ceremony.

Ted Opitz, Canadian MP similarly reminded the PCEC mission which, among others, covers acting for the sake of Polish-Canadian integration. “The programme suggested by PCEC gives a wonderful potential to build a platform between young Canadians and Poles. In addition, it allows them to integrate and share their own culture – he underlined during the PCEC opening ceremony.

During the meeting, the President of PCEC, Iwona Malinowska presented the main objectives, guidelines and plans which shall be performed  in the nearest future by the organization.  She also underlined the fact  that PCEC activities are based on free-of-charge acting of its Managing Board and volunteers. PCEC Vice President Joanna Danicka-Garbacz added „We want to get to the generation of young people, referred to by the sociologists as the network generation whose behaviour is shaped through multimedia, mobile hardware and access to the Internet. We shall handle various events for them, meetings with interesting personalities from the world of culture, arts and science.

Many renowned persons came to the opening ceremony. Among others, the ceremony was honoured by the Consul for Polish Diaspora, Grzegorz Jopkiewicz, MP Ted Opitz, the publisher and the editor-in-chief of „Gazeta” weekly magazine Małgorzata Bonikowska, television producer Dariusz Barecki, together with Irmina Somers, reporter, ladies from the Federation of Polish Women in Canada, link 13 with its President Magdalena Szewczyk, teachers from the Main Board of the Polish Teachers’ Union in Canada and the branches in Mississauga and in Hamilton, as well as, teachers from Polish schools from  Hamilton and Milton.

In the nearest period of time, the PCEC Board plans to prepare fairs for  I PCEC Universities Fair and a global project for children, as well as journalist workshop for Polish and Canadian youth. There are also plans to start recruitment to  „Summer with English” programme. The founders assure that all programmes shall be put into life in accordance with the most important assumption of the organization which is the integration of both the environments. That is why to utilize the culture richness of both the countries and to show that multicultural society is not an obstacle but a reason to start dialogue and joint action is  the most important thing for PCEC.