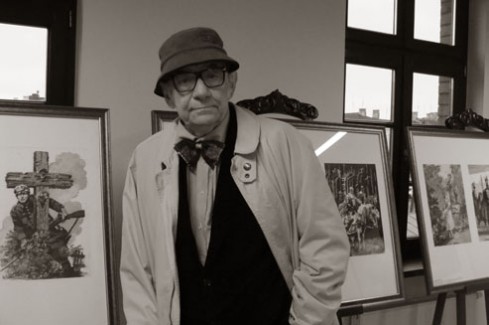 Professor Janusz Stanny was born on 29 th of February 1932. An illustrator, graphic artist and teacher, he graduated in 1957 from professor Henryk Tomaszewski’s workshop, at the Graphical Department of Warsaw’s Fine Arts Academy. From the beginning of 70s, he led the Illustration Workshop at his alma mater, where, in 1986, he received the title of professor. He is interested in illustrating, book graphics, posters, satirical drawings, and animated movie graphics. He has illustrated over 200 books, mostly for children. He is also the author of few books for children. His works include: “A tale of Dardanel King”, “About painter, ginger as brick”, “Horse and cat”. For his works, he has been honoured with many awards in his home country and abroad, including, among others, in 2003, the Medal of Polish IBBY Section for works as a whole for children and teenagers, and in 2006 the Gold Medal Gloria Artis. He belongs to a group of genre masters – the best Polish book illustrators and press drawers. Since 2003, he has been leading the Illustration Workshop in the Humanistic-Economical Academy in Łódź.