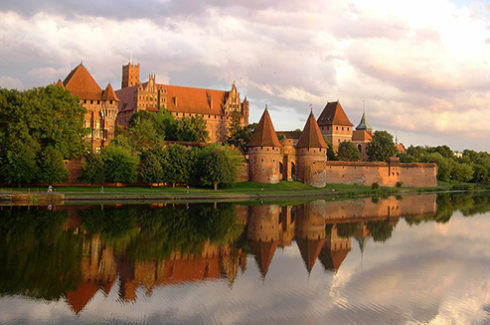 Malbork Castle is a classic example of the biggest 15th-century medieval fortress in Europe, covering an area of 21 hectares. It was the Teutonic Order’s administrative centre. After winning the Battle of Grunwald, did the Polish king Jagiełło have the chance of taking Malbork? This question remains without answer. But it is worth considering the chances Jagiełło had, standing by the walls of the Malbork Castle. From July 21 to 23 it will be very noteworthy, because of the annual festival of medieval culture “Siege of Malbork”.

The Malbork castle is the mightiest fortress of medieval Europe. The immense castle was started in the 13th century and built by the Teutonic Knights in stages. During the next century, when Malbork became the capital of the order’s large state, the fortress was expanded considerably through adding to it the Great Refectory and the Grand Master’s Palace.

Very impressive are the red brick walls of the Middle and High Castles as well as the belt of defensive walls with their towers and gates. Visitors can admire the ingeniousness of medieval master-builders while viewing the clever system of central heating, very rare in the medieval times.

The castle’s enormous size is best appraised from the Nogat River side, but also during the tour of the complex one cannot stop admiring the majestic beauty of the stronghold and its remarkable power. The Castle Museum offers many attractions to visitors, including a number of exhibitions with old weapons, amber, porcelain and faďence, and articles of artistic handicrafts.

Very popular with tourists are the son et lumière spectacles staged in the evening in the castle courtyards as well as nocturne tours of the castle interiors. The castle chambers often host music concerts and medieval style banquets. In recent years, a great historical event entitled The Siege of Malbork is organized during the last weekend of July. This year it will take place from 21st  to 23rd July.

Thanks to the magical atmosphere of the Malbork Castle and the rich program of “Siege of Malbork” there is something for everyone to feel like in a medieval castle. Five staging battles between Polish knights and Teutonic Knights, cavalry battle, and crossbow and archery tournaments will provide a lot of fun during the three days of festival. Moreover, there will be horses and stuntman shows. The battle scenes will be accompanied by medieval theatre, puppet theatre, street old music concerts, painting workshops, children’s castle, and several animations, involving jugglers, stilt walkers and fire eaters. Late in the evening until midnight, you can visit the castle along the specially prepared “night” route.

Malbork is the member of the Polish Gothic Castles Association that represents historical buildings located in eight other cities of the region.