﻿ The Grand Finale: The Big Money in New York -Link to Poland
Previous Next 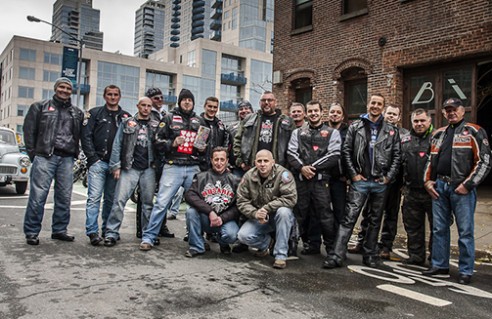 This is how it went down in New York City..

On Saturday, January 12th, in a “Biba” bar in Brooklyn, more than five hundred people took part in the concert on the occasion of the 21st Finale of the Great Orchestra of Christmas Charity. There was even more people willing to participate in the concert of Max Kubisia, Awangard, Chupacabra and Dzieci PRL’s band, and in auctions of valuable items, than were allowed to attend. New Yorks’s chief of staff was Marcin Tuliński, who eleven years ago collected over twenty thousand dollars for the GOCC. This year, not only the “Biba” bar was bursting at the seams but also cans were full. It seems that this year will be twice as big as eleven years ago.

The day began with street money collection in the Polish  districts of New York City. The signal to start off, was a horn of a historic Warszaw car belonging to Katarzyna Kucharska, the owner of Polka Deli in Philadelphia, and one of the sponsors of the event. A 32-year-old car, decorated with GOCC’s hearts passed majestically through the streets of Greenpoint, accompanied by more than a dozen motorcycles from the Husaria Club.  This unusual-looking escorts made an impression on people, not only because of the noise they made, but also because of the original way they cruised around the streets like royalties.

When the smoke of the engine diffused into the cool January air, volunteers went to work with official cans. Most of them came from the PSO (Polish Student Organization in New York), who supported the action as a co-organiser. “Our volunteers walked in pairs on the streets of Ridgewood and Greenpoint to reward people with the heart labels, in exchange for even the smallest donations.” – said the president of PSO, Karolina Leszczewicz, who didn’t let a foot injury keep her from from taking part in the action. “There were 14 people collecting the money, and everyone of them came back with a full can, deserving of awe and praise to the Polish people.”


Other Polish organisations from New York also joined in on the action. Ela Serda, a teacher in a Polish training school of ‘St. Cyril and Methodius’,  collected money on her own in her school, as well as in the Henryk Sienkiewicz school. It resulted in several  full cans, which together brought $ 1,905.93, with another $ 210 added by Artur Pustula – director of the Senior Club “Krakus”. The money came from the collection among  the club members during their meetings, one of which they also watched a film about the 20th anniversary of GOCC activity. Meanwhile, other volunteers worked in “Biba” bar in Brooklyn preparing the final of Saturday’s event…


More information on the events of “Biba” bar and the 21th Final of GOCC in New York City can be found in Tomasz Moczerniuk’s blog at www.papatomski.com