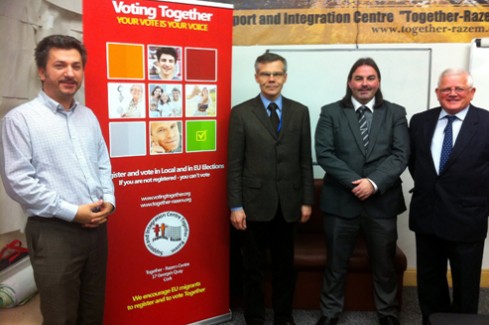 Together-Razem Centre has been running the Voting Together information campaign since 10th of October 2013. Its main goal is to encourage all EU citizens living in Cork region to register in the Local Council as a voter for the Local Government Elections and also European Parliament Elections to be held in 2014.

On Friday, 1st November 2013 we had a distinguished visitor to our office, Mr. Gints Apals, the Ambassador to Ireland from the Latvian Embassy in Dublin. The Ambassador is keenly interested in promoting the Voting Together Program – Electoral Education and Civic Activation of migrants from the EU, which he sees as playing an important role in the integration of the Latvian Community within Ireland. To this end, Ambassador Apals has established an association with Together-Razem, who seek to provide electoral ducation and civic activation of migrants within the EU. Together – Razem is an Integration and Support Centre and is promoted in this task by the European Parliament office in Dublin in the person of its Head of Information Office, Mr. Francis Jacobs.

Ambassador Apals stressed to us the necsessity for increasing awareness of Local, National and European Politics within the local Latvian Community which has an estimated population of approximately 25,000 Latvians living in Ireland. It was agreed that leaders within the local Latvian Community in Cork should establish a cooperative Workshop with Together – Razem in order to promote electoral education. The first opportunity to meet was at our Workshops which were being prepared as part of the Voting Together Program. These Workshops took place on Monday 4th November and Monday 11th  November in the Together – Razem centre. Within these workshops the importance of cooperation with the Local Community was discussed and there was an opportunity to find out more about the Local Government and also the current Political Parties in Cork and most of all how to actively participate in electoral activities within the local community.

Ambassador Apals assured us of his conitnued support and together with his colleagues he will contribute towards promotion of the Voting Together campaign and website www.votingtogether.org. The Ambassador also expressed his admiration for the overall activities of the Together-Razem Centre and committed his support for the idea of promoting the roles and civic privileges of long-term working migrants from Eastern Europe.

Together-Razem Centre  has been running the Voting Together information campaign since 10th of October 2013. Its main goal is to encourage all EU citizens living in Cork region to register in the Local Council as a voter for the Local Government Elections and also European Parliament Elections to be held in 2014. The www.votingtogether.org  website is now up and running and there is a leaflet campaign held in county Cork. There are volunteers in Together-Razem Centre who can provide assistance in filling out the forms with those who have registered. The workshop for local leaders from Lithuania, Spain, the Czech Republic, Slovakia and Estonia will take place soon.

Your vote counts so register today! – simplified registration only until 25th of November.