﻿ The multicultural cuisine of coastal Gdańsk | Link to Poland
Previous Next 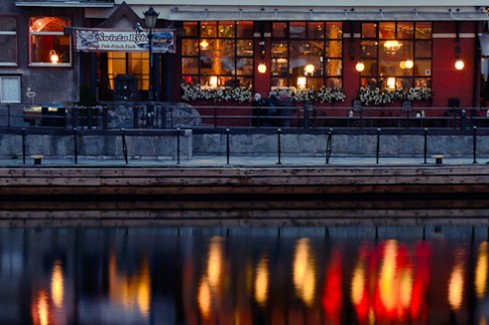 The multicultural cuisine of coastal Gdańsk has always been based on fish. Herring, Baltic salmon, sprats, eel, sturgeons and above all cod, turbot and various kinds of flounder types of fish have appeared on tables, served in thousands of ways.

Recipes were based mainly on Kashubian, German and Jewish cuisine and consumption was always accompanied by alcohol – beer, wine and spirits.

For tourists coming to Gdańsk, menus composed of gifts of the sea are waiting in the restaurants. You could try fish soup, amber – with a flavour enhanced by the addition of amber liquor and eel soup with dill, Kashubian style herring or herring in oil, as well as many species of fish fried or served straight from the grill. For meat gourmets, restaurateurs prepare Gdańsk style goose, roast pork with cumin, served with sauerkraut or Grass style braised goose with estragon.

Desserts in traditional Gdańsk cuisine are made up of candied fruit and cakes. In Baltic cuisine cakes still reign, while candied fruits are slowly replaced by baked fruits, often with the addition of alcohol. So that tradition could be fulfilled, you need to finish a decent Gdańsk dinner with a glass of Goldwasser, a Gdańsk liqueur, in which flakes of genuine gold dance.

Gdańsk is the only city in Poland that has been nominated in the competition for the title of “European Best Destination 2017”. You can vote via the portal  VisitGdansk  from 20 January to 10 February 2017.