﻿ To the Cinema, with love – a history of the Filmland Polen | Link to Poland
Previous Next 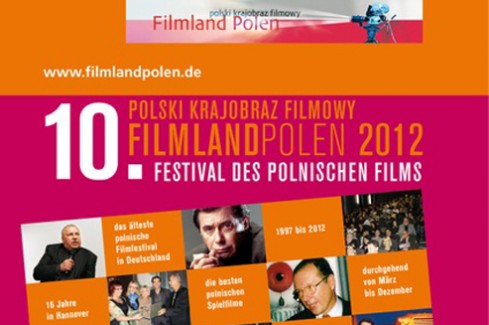 In April 2012, a jubilee began. The 10th New Polish Film Festival FILMLAND POLEN commence and as usual shall continue through to December. The films are shown once a month in three German cities: Hamburg, Hannover and Lübeck.

In April 2012, a jubilee began. The 10th New Polish Film Festival FILMLAND POLEN commence and as usual shall continue through to December. The films are shown once a month in three German cities: Hamburg, Hannover and Lübeck. The viewers have had the opportunity to watch: Rose (Róża) by W.Smarzowski,  Suicide room (Sala samobójców) by J. Komasa, Courage (Wymyk) by G. Zgliński, Mole (Kret) by R. Lewandowski, Ki by L. Dawid and Fear of falling (Lęk wysokości) by B. Konopka.

During the course of the “Evening of documentary film – Polish-German history” Divided class (Podzielona klasa) by A. Klamt, Paczki Solidarności by L. Hohmann and in reference to celebrated in 2012 Janusz Korczak Year: Król Maciuś Pierwszy (King Matt the First) by S. Jesse and L. Stützner and Bankructwo Małego Dżeka (Bancruptcy of Little Jack) by A. Glińska, were each shown. The special guests of the festival included actress Agata Kulesza, who portray characters in each of the three films shown: Róża (Rose), Sala samobójców (Suicide room) and Ki and director of Róża (Rose) – Wojtek Smarzowski.

In December viewers will have an opportunity to watch the film by M. Koterski “Baby są jakieś inne” (Women are strange). The organisers of the festival are also preparing the special edition film showings, as well as meetings with directors entitled, “Cosmopolitans – Poles in the world cinematography”.

How did the New Polish Film Festival “Filmland Polen” come about?

Its originator, executor and curator is Grażyna Słomka. She studied Film Science and Directing at the Film, Theatre and TV college in Łódź. She worked as a journalist for the Elbląg regional television and radio and she also ran both a video rental store and a film society cinema. All that before, in 1995, life presented her with a new challenge as she moved with her family to Germany.

Thanks to her natural optimism and diligence and with the help of her loved ones, she was able to face all of the obstacles that came with the language barrier as she acclimatised to her new reality. In 1997 she addressed the head of the independent cinema (KoKi) in Hannover, Mr Sigurd Hermes, with a proposal to set up “A retrospect of Polish cinema”. Her idea was met with appreciation and enthusiasm. Using her professional experience and contacts from her many years of active work in the Polish cultural sector, at the turn of 1997/98 Słomka organised the first overview of Polish cinema in the Hamburg Consular District. It contained over 30 narrative movies (mostly by Krzysztof Kieślowski) and documentaries, as well as meetings with film-makers such as Krzysztof Zanussi, Maja Komorowska, Iga Cembrzyńska, Sławomir Kryński, and the film critic Jan Olszewski.

The success of this undertaking led to the continuation of screenings of Polish movies between 1998 and 2000 linked with the “Weltkino – Eine Filmreise mit der EXPO 2000” – “Filmland Polen” activities. During that time the newest productions of Polish cinematography were presented, and meetings were held between audiences and the film makers and actors. This review of Polish cinema became not only an opportunity for Poles to meet and make new contacts or engage whilst enjoying good Polish cinema, but it also attracted quite a large German audience interested in our culture.

In June 2000, Słomka, whilst working for the Polish EXPO Pavilion in Hannover, organised a week-long review of Polish cinema as one of the activities accompanying the 2000 EXPO. Narrative films, as well as documentaries and animated movies were included too. This review was also a chance to meet film-makers like Krzysztof Krauze and Krzysztof Kowalewski. During the Polish Days Andrzej Wajda’s movie “Pan Tadeusz” was shown on the largest screen in Europe, and members of the cast (Alicja Bachleda-Curuś, Michał Żebrowski, Krzysztof Kolberger) met with the audience afterwards.

Along with this festival, the review became a recurrent event and in 2002 it didn’t just take place in Hannover. Post 2003, “Filmland Polen” took the form of the “New Polish Cinema Festival” and is now a permanent staple of the cultural calendar of four cities of states in northern Germany: Hannover, Lübeck, Hamburg and Bremen.

This year-round festival is a celebration of Polish cinema. Every month there are screenings of the newest productions in independent cinemas (KoKi), and at the end of the year the festival audiences choose their favourite film which will be awarded the Hannoveraner Prize. It also offers a chance for unforgettable personal meetings and discussions with creators of the presented films. It promotes Polish cinema, and gives the increasingly numerous German audience an insight into our country.

We will soon find out who will win the Horse of Hannover for 2012.