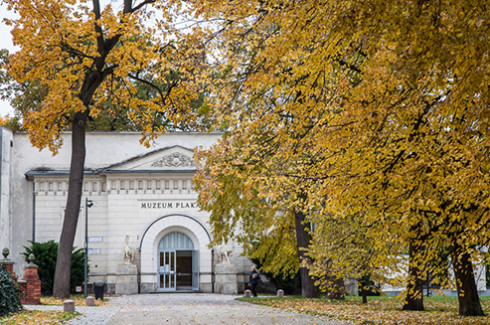 The Poster Museum inaugurates the jubilee 25th edition of the International Poster Biennale. After 50 years the formula of the event changes. This year, its main part will be “The Poster Remediated” exhibition devoted to the functioning of the poster in a public space and electronic media.

In recent years there has been a lot of talk of the death of the poster. Printed images pasted up on walls will, we are told, be replaced by screens with lively animated images; urgent messages are now communicated by social media. This is not, however, the death of the poster but its remediation. Focusing on the way in which posters have appeared in art, in the media and on the digital screens which are filling our world, The Poster Remediated – the fiftieth anniversary exhibition of the Warsaw International Poster Biennale, will explore the past, present and future of the poster around the world.

The Poster Remediated – the core exhibition, Poster Museum at Wilanow

Opening in Warsaw’s Poster Museum in June 2016, The Poster Remediated will explore how the conventional poster is undergoing rapid transformation in an age of ubiquitous digital screens and social media. It will show that the internet has not – as some commentators have suggested – killing off the poster. But the medium is being changed by digital technology.Sometimes this means the creation of entirely new forms of poster such as interactive billboard advertisements which address the passer-by in lively and sometimes unsettling ways.

In other settings, such as the conflicts which exploded in the Maidan in Kiev in 2013 or in Tahir Square in Cairo in 2011, the Internet has provided an up-to-date means for circulating low-tech and hand-made poster images.

The remediation of the poster is not, however, a new phenomenon. The fiftieth anniversary exhibition will also feature iconic designs from recent decades which have found their ways on to cinema and television screens, the covers of books and the front pages of newspapers.Designs like the ‘I am a Man’ poster or ‘Je Suis Charlie’ have been so impactful precisely because they caught the attention of the world’s media.

Carried by striking black workers demanding equal rights in Memphis in 1968, ‘I am a Man’ was a powerful symbol in the campaign for civil rights in the USA. And in recent years, its message has been revived in new posters protesting against the deaths of young black men in Police custody in the United States.

‘I am a Man’ and ‘Je Suis Charlie’ shows how posters can promote justice and human rights. But posters are often accused of manipulating the viewer and of dominating our streets too. Some activists even remove commercial advertisements from their illuminated frames, replacing these posters with abstract art or anti-consumerist messages.

Continuing the tradition of the Warsaw International Poster Biennale The Poster Remediated exhibition will be a truly global exhibition featuring designs from Europe, the Middle East, China, Korea, Latin and North America. The modern concept of the exhibition and the accompanying online competition was invented by Professor David Crowley, a British curator and an expert in the art of Eastern Europe, who works at the Royal College of Art in London.

As always, the show will be accompanied by a competition to reanimate classic poster designs like “Dylan” by Milton Glaser or “Save the Human Rights” by Finn Nygaard. Jury will choose ten best animations which will be included into the core exhibition.

History of the International Poster Biennale in Warsaw – retrospective exhibition

Another exhibition in the anniversary’s programme will be a retrospective of the Biennale from 1966 to 2014. Arranged by curator Zdzisław Schubert at Salon Akademii, the gallery of Warsaw’s Academy of Fine Arts (ul. Krakowskie Przedmieście 5, entrance from ul. Traugutta), it will present the event’s history spanning half a century. The selection of works will include not only winners of particular competition categories but also the most interesting works, which appered at the Biennale and are now permanently subsumed into the graphic design canon of the second half of the 20th century.

12 June 2016
The programme of the 25th anniversary edition of the International Poster Biennale in Warsaw will feature also a conference dedicated to poster and its artistic, design and communication aspects. The invited guests – art critics and designers, will analise today tendences. They will share comments upon role and meaning of the poster in contemporary cultural landscape. The final discussion at the conference will focus on future of international poster competitions and festivals over the world.