﻿ A wedding during a divorce? | Link to Poland
Previous Next 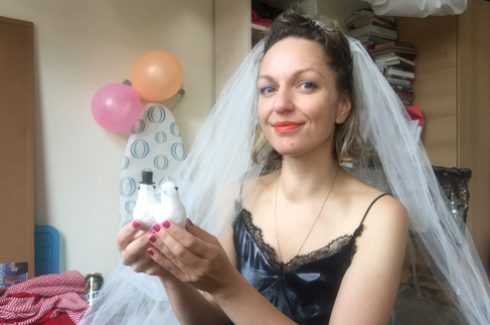 The Wesele-Wedding is an interactive theater performance in which the audience playing the role of wedding guests takes part and decides about its final shape. How will end a wedding in Atomice? We do not know. It all depends on you, dear guests!

A one woman show rooted in the European tradition of absurdist political comedy and performed in English, Polish, and Esperanto.

It’s the last Polish-English wedding before Brexit. The MC invites the audience to take part in wedding games and a Polish disco singalong to keep the couple together, keep the international community together. Will they succeed?

A comic collage of integration stories, raunchy wedding rituals and renditions of disco polo songs by a real life Mistress of Ceremony (never a bride). Peppered with Polish and Esperanto, the show explores the role of traditional values, family bonds, and whether popular culture can bring us together.

A wedding during a divorce?

At midnight, the UK will officially leave the EU and restrictions on mixed marriages will be implemented. It’s the last Polish-English wedding before Brexit, and the Mistress of Ceremonies is making sure the celebrations are running smoothly and in accordance with Polish tradition. The guests/audience are invited to take part in racy wedding games and disco polo singalongs – a music genre that divides Poles as much as it unites them. With full media attention on this end-of-an-era wedding, it’s ‘keep calm and party on’, while the realisation that tonight is the highlight of the MCs career and most likely the last wedding she will ever host, gradually sinks in.

Inspired by a 1901 masterpiece of Polish literature by S. Wyspianski, ‘Wesele/ Wedding’ presents truths of the Polish migrant experience set against the provocations of the mainstream media. The show explores gender stereotypes, tradition, religion & family values, exposing how they shape society’s perceptions of itself & the ‘other.’ Moments of comedy are interspersed with poignant and sometimes dark ‘off-script’ stories of love, family bonds stretched over many miles and anecdotes about migrants’ lives and attempts at integration.

The evening’s celebrations are interrupted by news that European borders are closing. Could the Brexit negotiations have gone wrong? Again? As the party descends into chaos, the MC is determined to complete the wedding ritual with the party trick she’s been saving ’til now. Tickets are available online: Wesele/Wedding or at the box office before the performance