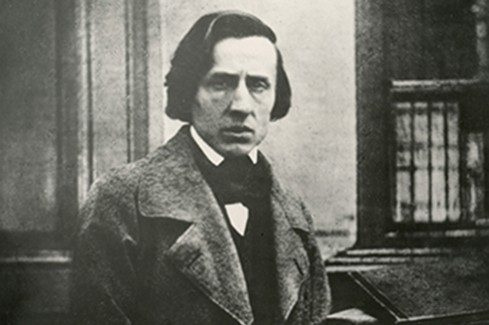 He is our national pride, symbol and icon of Polish culture. The vast majority of Poles can distinguish him from Mickiewicz and Kosciuszko. We also have no doubts that he lived in the nineteenth century, inspired by Polish folk music, composed music for the piano, created mazurkas, polonaises, nocturnes and ballades. Moreover, it is commonly known that his image appears on vodka, chocolates and postage stamps.

He is our national pride, symbol and icon of Polish culture. The vast majority of Poles can distinguish him from Mickiewicz and Kosciuszko. We also have no doubts that he lived in the nineteenth century, inspired by Polish folk music, composed music for the piano, created mazurkas, polonaises, nocturnes and ballades. Moreover, it is commonly known that his image appears on vodka, chocolates and postage stamps.

Chopin, as Slowacki who was a great poet, undoubtedly was the greatest Polish composer, and he is still the most recognizable Polish musician in the world. We like to boast about him and bring to mind that he was one of us, just as we do in the case of Maria Sklodowska – Curie, Jan Matejko and Czeslaw Milosz.

Who he really was – a poet of the piano with tousled hair, the one who made the women on French salons faint? Or maybe anorexic dandy who under the guise of legendary sense of humour masked his tragic fate of incurably ill immigrant?

He was born 200 years ago in Zelazowa Wola as a child of impoverished noblewoman and a French tutor. He composed the first songs on the piano at the age of 7. Chopin was called “Mozart of Warsaw” and “Paganini of the piano”. He was a favorite of the Warsaw society, Prince Constantine the Great, and even the Tsar Alexander admired him. On his diploma from the Warsaw School of Music we can read: “Fryderyk Chopin. Special aptitude. Musical genius “. In 1830 he was urged by the prospect of riots against the tsar, so he was forced to leave Poland, and he never came back. At first he emigrated to Vienna, however, after the November Uprising he moved to Paris. It was exactly there, in 1837, where he met his controversial, six years older partner – George Sand, a French minor writer and a woman who became famous rather because of numerous scandals  made at the Paris salons, than her compositions. At her country estate in the south of France, Chopin created the greatest and the most famous masterpieces such as: Mazurka in D Major, op.33 no. 2, Polonaise in A Major op.53 and Piano Sonata in B Flat Minor op.35 with the famous “Funeral March” in part III. When parted with Sand, Chopin stopped composing, limited his active social life, and after less than two years, he passed away of a mysterious, incurable disease that he suffered from the childhood and which led him to the premature death at the age of 39.

What kind of man Chopin was?

His true appearance is known thanks to the mask cast in bronze after his death by Jean-Baptiste Clesinger (son-in-law of George Sand), and the only one photography that was taken during his life. Thanks to the acknowledgement of people contemporary to the composer, as well as his preserved letters we learn that he was pale and weak. With the height of 170 cm he weighed only 44 kilograms. It is also known that he was oversensitive about his appearance. He was particularly precise and uncontrollably extravagant with his clothes. Excellent taste and sense of style made him an authority in the field of fashion. People in Paris followed him and wore a snow-white gloves and hats a’la Monsieur Chopin. In spite of his illness, Chopin led bachelor lifestyle. Mickiewicz accused him about losing his time and wasting his talent because he spend too much time on French salons. Well, his enormous charm, eloquence, sophisticated sense of humour and popularity caused that he was treated as a valuable guest. From ladies he always received a special attention, because like no other dandy, Chopin was able to enchant women with his good manners. No wonder that most of the women from French good families wanted to apply for the piano lessons. In addition, most of them considered it as their duty to faint regularly during his concerts.

Chopin seemed to be life and soul of the party, nevertheless, the closest people remembered him as irritable introvert with uncontrollable outbursts of anger, painfully struggling with stamp of refugee and with the awareness that he abandoned his home country. To the end of his life Chopin did not reconcile with the disease. He even believed that the doctors were wrong with the diagnosis of tuberculosis and sentenced him to death. The current medical knowledge seems to confirm Chopin’s feeling, as the cause of his death was not TB, but probably cystic fibrosis, which is similar in its symptoms.

Chopin left behind more than 200 compositions, and the vast majority of them are strictly for the piano. Why did he compose only for the piano? Perhaps he could not manage and certainly did not want to venture into symphony and opera. Presumably, symphonic pathos and operatic conceit interfered with his delicate introvert nature, therefore he could only express himself on intimate piano.

Chopin is then a tragic figure, a great Pole, a brilliant and world – famous composer. He became an unique artist, Polish and universal at the same time. He is above the cultural codes, social and ethnic divisions which is by definition an attribute of genius. Finally, Chopin is our cultural heritage, he is the noblest artistic product “made in Poland” and the international at once, the representative of the most perfect in form and expression romantic music.