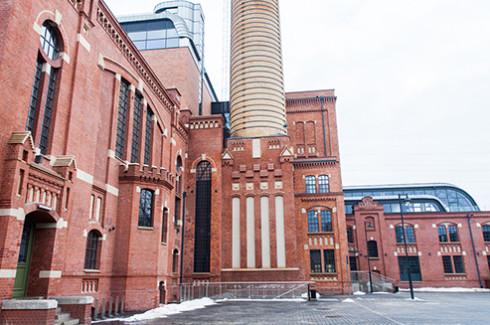 In the very heart of the city, about 300 metres from the Łódź Fabryczna train station and a 10-minute walk from the Piotrkowska Street, an unusual place that radiates positive energy is being created by real professionals and passionate people. A place which we had a chance to visit and want to tell you about. Welcome to EC1 Łódź.

Three very special projects, the National Film Culture Centre, the Planetarium (EC1 East) and the Science and Technology Centre (EC1 West) are being organised under the auspices of one institution – EC1 Łódź City of Culture located in the former power plant in Łódź. The plans to grow the place reach far beyond that, though.

Last year the renovation, construction and investment works were completed in the East and West buildings. In 2016 they are going to be open to the public as well as individual clients, institutions and companies.

The power plant in Łódź was built step by step. The EC1 East building was constructed in 1907 and the EC1 West building was ready to be used in 1929. During its functioning until 2005 it was losing its unity and architectural integrity. It was constantly expanded and different installation parts or workshops were added. During renovation and construction works all these unnecessary elements were removed and thanks to the revitalisation process all the interesting elements of post-industrial infrastructure in the main buildings were recovered and displayed. Especially in the EC1 West building, where the structure of the old heat and power plant was maintained, including steering devices, furnaces, boilers, a turbo generator and a cooling tower.

These elements will not only constitute an aesthetic part of the Science and Technology Centre’s exposition that is being created there. They will become its indispensable part, which will make it stand out against other places of this kind. Thanks to the remaining equipment and multimedia presentations visitors will be able to see how coal transported in a conveyor falls into the boiler through a huche, burns out and creates high temperature heating the water. Then the heated water changes into steam, moves through the installations, reaches the turbo generator and makes electric power. It’s pure magic!

One could say that EC1 Łódź is an experiment on a large scale. We want it to become a place where people can spend time in an intelligent way. A place that radiates positive energy, passing it on throughout the city and far beyond. We hope it will become a perfect alternative to spending time in a shopping centre and a driving force that makes Łódź grow, strongly connected with is identity, reaching back to the most important moment in its development – explains Michał Kędzierski, Social Communication and Marketing Director at EC1.

The Planetarium cinema room occupies the space between 0 and -2 level and it has a 18-metre dome with a 14-metre screen hanging underneath it on a special frame. There are also 110 comfortable chairs waiting for the viewers.

We take our seats and we lean back in order to watch the screen above our heads and everything around us easily. The show starts. We feel like passengers on a spaceship flying among different stars and planets. We are getting closer and farther, we are passing by the Betelgeuse, we are taking a look into the Olympus Mons crater on Mars and we are learning what the Saturn rings are made from. We are traveling in space and time, going millions of years back. All the sensations make us dizzy!

The show usually takes 60 minutes but thanks to the presenters we can always count on a one-of-a-kind lecture and other experiences. The viewers can not only ask questions about the things they see but also suggest which planet to get closer to and what spectacle to see. The presenters change the show according to viewers’ expectations willingly. Guests from abroad can use headsets with presentations in other languages, including English and German. There is also a possibility to watch every show in English as the main language.

The Planetarium is equipped with the highest quality screening system that allows for 8K shows (over 32 million pixels), which enables watching even smallest objects. Films and presentations about the space were created on the basis of authentic photographs from NASA and other spacer agencies, and connecting the whole system to the Internet allows for a real-time download of data connected with seen objects as well as things happening on earth. We can watch the movement of tectonic plates, air masses, volcanic activity, temperature in the oceans, the ozone layer or things that are happening on the sea bottom. In this way the spherical screen in the Planetarium can also play the role of a huge virtual globe during geography lessons or a meteorology lecture. It can become a battlefield, Lost Atlantis, background for Charles Dickens’ stories or the surface of the ocean. The possibilities are practically limitless and every science can find a field for its activities here. We just have to call the Planetarium in advance and discuss what kind of lessons or lectures we would like to prepare there.

The staff at EC1 Planetarium are people with passion and vast experience as well as skills gained in astronomic observatories or other planetariums. They include specialists on didactics and teachers who make sure that the content offered by the place and addressed to schools is consistent with the curriculum. They know what is important, what should be emphasised and how to use the possibilities of digital Planetarium to pass not only knowledge but also artistic aspects the best way possible. Moreover, they don’t limit themselves to shows in the cinema room but they also conduct vast popularising activities outside. Last year they organised the Sun eclipse and the Perseids shower watching for the residents of Łódź and a transmission from the lunar eclipse. This year they are also waiting for interesting atmospheric phenomena, such as a transit of Mercury across the Sun in May. It is worth following the Planetarium in social media and have an access to the latest information about the upcoming events.

Apart from the regular activities connected with astronomy, there are also exhibitions, conferences and scientific events organised in EC1 East building complex. The beautiful Art Nouveau space in the engine room has already witnessed many theatre performances, concerts, company events, parties and even music videos production.

The spherical screen in the Planetarium can also be an inspiration for film experiments. The production of spherical shows requires different cropping or camera work and overcoming common schemes. The final effect is always amazing. The Planetarium team hope that their successful cooperation with the students from the Łódź Film School will continue and that they will manage to attract other artists interested in crossing the borders of art together.

In the meantime, in the Science and Technology Centre there are three thematic paths being created – Processing Energy, Knowledge and Civilisation Growth and Micro World – Macro World, which will be connected and interweave in the EC1 space. They will be open to the public in the middle of 2017.

The centre has two spaces at its disposal – the old part of the heat and power plant from 1929 and the newly built structure. In the historic part there will be two thematic paths. The first one will be connected with processing energy, using all the qualities and elements kept in the power plant: 4 boilers, an original turbo set, a complex of pumps as well as the control and switch room. Only those elements that match the space will be added. It will tell the story from the moment of bringing coal to the coal square until the energy is distributed outside. Moreover, the centre employees want to go back in time even further and tell the visitors how coal was made.

In the historic space there will also be a part of the third path, Micro World – Macro World. This will be an attempt to look into the space which is normally unavailable to people, meaning micro-, nano- and macro-scale observation. Also cognitive and research methods used in science will be illustrated.

By walking this path visitors will reach the cooling tower with a new building constructed inside. It is an exhibition space with various interactive installations that complete the story of the micro and macro world. There visitors will be able to make an experiment using a torsion spring, experience the state of weightlessness or move to different places by means of virtual space.

As far as the second thematic path is concerned, Knowledge and Civilisation Growth, it will be organised in a separate, newly constructed building. Its architecturally complicated structure will be used for creating expositions and separate scientific experiments. It is to encourage (not only) young people to expand their knowledge and continue experiments and measurement analyses they start during their visit at the centre at home or at school.

Visitors walking along these paths can rely on the help from the employees who will be glad to answer all their questions. They can also make experiments and organise experimental theatres or workshops. Moreover, an auditorium for 100 people has been created in one of the boilers and it is a perfect place to organise conferences or other events.

The centre is also planning a High Voltage Path. It will be located in a place that used to be full of high voltages, meaning the electric switchboard. There are still electric wires and huge insulators remaining there. The centre’s staff want this place to become alive again by using safe but very spectacular installations connected with high voltage – including Tesla coil, spark gap and classic experiments. There will also be a virtual game with players able to buy their own power plant and trade coal or energy.

Together with the La Villette Centre in France, the Science and Technology Centre is also preparing a separate zone for children so the youngest ones can find something interesting for themselves and  stimulate their imagination even more.

The Micro World – Macro World path will be complemented by the 3D Spherical Cinema equipped with the latest 4K 3D screening system. The shows will be devoted to astrophysics, extragalactic astronomy but also elementary particle physics, atomic physics and nanophysics.

We are looking forward to the opening of the Science and Technology Centre and we encourage you to visit the EC1 Planetarium today.