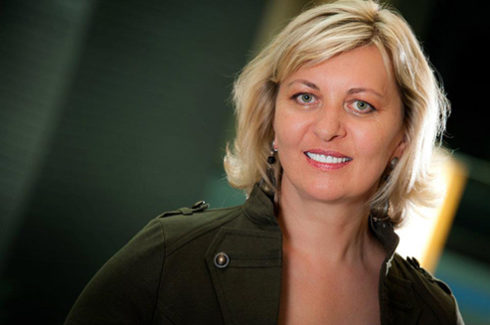 When did you leave Poland? How did you end up in Seattle?

I left Poland at the beginning of the 1980s, when I was still a student at the Jagiellonian University. It was the time when the first sit-down strikes started and it seemed that there were no prospects for independent living or professional development in Poland. That’s why my fiancé at that time and I decided to go to Vienna. We didn’t have a plan. We only knew that when the situation in Poland improves, we will come back.  When we were in Austria the martial law was introduced and we could forget about coming back to Poland. We started to look for possibilities to move to one of the countries that welcomed immigrants at that time, such as USA, Canada, Australia and South Africa. To all the applications we submitted we received one answer: from the States. And so through a program of connecting sponsors and new emigrants we ended up in Wyoming which has quite a small population. We started our emigrant life focusing on a language school and sporadic jobs.

After two years we met someone who offered us a move to Seattle and help in finding a job there. We packed our things and we set off to the unknown again.

As we all know, the USA are the country of rising opportunities. Looking at things from the perspective of time I think that from the very beginning education and assimilation with the American society was the key to our success. By entering the community that required becoming independent and surviving without knowing English or having a specific profession and family support we had to take action. We could also do this thanks to the kindness and openness of people who live here.

Of course it required a lot of work, time and experience as well as taking additional courses to catch up with our English or sciences. Thanks to these efforts I graduated from the Communications and Public Relations Department at the University of Washington in Seattle, gaining first the Bachelor’s and then the Master’s Degree. It took me 10 years because in the meantime I was working, bringing up my sons, running the house and working in the local community. I was a typical “Polish mother”. (laughter)

And how did your adventure with Microsoft start?

Gaining education was very helpful and opened many opportunities. It was the time of the IT boom. Microsoft was founded and job openings started to spring up like mushrooms. I thought it was a great opportunity and that living in Seattle I couldn’t ignore what was going on and all the civilisation, technologic and economic changes.

Of course at the beginning Microsoft didn’t hire me because I had no experience in IT and the experience I did have from the local TV station, CBS Network, wasn’t sufficient. I decided to start working in a smaller software company, which was a start-up with 500 employees. I was gaining the necessary experience there for 2.5 years and then I applied for a job at Microsoft again. In this way my 15-year adventure at this company started in 1997. It was a very important experience in my life. Microsoft looks after its employees’ development. Changing positions or departments every 2-2.5 years as well as working in an international and multicultural environment motivate to self-development and mastering one’s professional competencies.

In 2002 I was asked to transfer to Munich for 3 years to run the PR Department and so-called citizenship programmes for Central and Eastern Europe. In this way I could come back to Europe after many years and discover it in a new way. Despite the fact that during my 20 years of emigration I visited Poland from time to time, only when I lived in Europe I could get to know its reality and changes that took place during my absence.

What made you start working for Poland and Polish community?

Before I moved to Europe with Microsoft I had been involved in many projects connected with helping and supporting the Polish community in Seattle – charity campaigns, artistic programmes, cooperation with the Polish Community Centre, editorial help with our publication and translation of documents.

The last 5 years since Seattle took an important place on the map of the world have been most intense. People started to notice that it is a global centre of scientific inventions, technology, aerospace industry and medicine. This results mainly from the existence and operation of such companies as Microsoft and Boeing.

It was at that time that delegations and economic missions from many parts of Poland, including pomorskie, podkarpackie and małopolskie province, started to knock on our doors. Because the older Polish organisations dealt with culture and education, there were no people who could deal with business matters. Answering this demand we created the Polish-American Chamber of Commerce in 2011. For some time I was its Vice-President and then President. At the moment I’m a member of the Management Board. We met with various delegations that consisted of ministers, ambassadors and other representatives of diplomatic service, arranging their meetings with the governor, mayor or representatives of the biggest local companies such as Microsoft, Boeing, Amazon, Starbucks and Weyerhaeuser as well as people from Trade and Investment Departments from local agencies and other chambers of commerce.

These activities were noticed and appreciated, which resulted in the need to open a Polish consulate in the growing metropolis of Seattle as well as appointing an honorary consul. The whole procedure took a few years but in the end, in September 2014, I was appointed an Honorary Consul of the Republic of Poland in Seattle. My task is to act in aid of developing friendly relations as well as economic, cultural, scientific and academic cooperation between Poland and the USA, providing consular services for Polish citizens who live in the consular district of Washington and promoting the positive image of the country and tourism in Poland. I continue my previous social activities but my title is important enough to give me a possibility to meet with decision-makers in many companies as well as representatives of the city, commune and state authorities. It is also important when representatives of other countries come to Seattle. Being a member of the diplomatic corps I receive invitations to such meetings and then I have a chance to promote Poland from the point of view of business, education as well as cultural and academic exchange.

This is what and how we do things in Seattle. The Polish community here is not large but it consists of very energetic people who are very committed. They are not only partners in what they do but also friends. Some of them have been active in our Polish community for over 50 years. At the same time we try to involve young Poles who have just come to our city.

Have many Poles have moved to Seattle recently?

Yes. It is a new emigration wave which cannot even be called emigration. People choose to come here, usually due to a job offer they received together with the whole relocation package sponsored by their company. These are young, educated people; professionals who come to Seattle due to a huge development of technological, medical and aerospace industry. These people come directly from Poland just after they graduate, found by head-hunters somewhere online or people who lived abroad before, for example in Europe, Australia or other states in the USA. For us this also means help in growing the Polish community and its future as well as a great integration of young generation with local leaders of the Polish community.

For 24 years Seattle has had its Polish Film Festival and for a few years the Polish community has been organising a new Polish Festival, which is a part of the prestigious Festál cultural programme organised under the patronage of the City of Seattle.

Indeed. The Polish Film Festival is one of the longest existing festivals of this kind in the USA. For 5 years now we have been also organising the Polish Festival at the Seattle Centre. Its aim is to propagate Polish culture, tradition and contemporary achievements across the city and the whole state. We didn’t want to do this festival only for our own sake but also for the American and international audience. Of course, while we organise it, we also enjoy it a lot.

Thanks to this festival we want to create and objective image of Poland and present not only folk music and traditional Polish cuisine but the whole range of offers, like we did this year. We demonstrated both classic and jazz music as well as dancing. There were cooking and baking shows, exhibitions and meetings with interesting Poles organised. Usually we also have an information point where people can learn more about Poland and the Polish community.

Our festival is known from having unique energy and it is very popular and widely attended by VIPs as well as common citizens. There are more or less 10,000 people gathering at the Seattle Center by the Space Needle every year. We try to prepare everything with passion and welcome our guests with joy and Polish hospitality.

In the future I would like to cut the geographical distance between Poland and Seattle even more. I’m thinking about creating wider and additional forms of exchange. They have existed for a long time, for example between the twin cities of Gdynia and Seattle. They cooperate on a business and education level, which consist in student exchange. The state of Washington has also initiated one-year internships for high school students who can learn how to run their own business. A few years ago this programme was joined by students from Gdańsk and Bolesławów. Not everyone can come to Seattle and so counsellors and American jurors come to Poland in order to evaluate and give advice on the projects prepared by students in Poland during the Washington Business Week workshops.

These are small successes of the Polish community in Seattle. They make us very happy because even after 20-30 years of emigration one cannot forget one’s roots. I believe they are the foundation of our identity and they allow us to spread wings and grow our possibilities for the future.