﻿ Hitchhiking across continents: “Poland? Where is it?” | Link to Poland
Previous Next

Home » Projects » Polish trip to… » Hitchhiking across continents: “Poland? Where is it?” 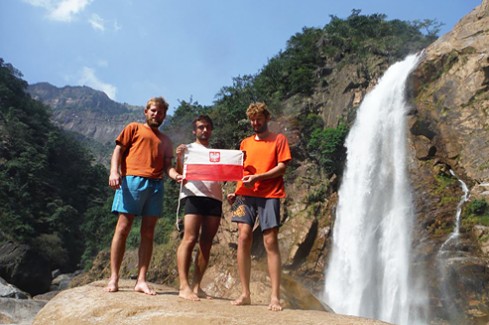 We are group of four students from Wroclaw. We start hitchhiking journey across the continents. There is a long way to go and there are many new experiences waiting us. We are going to share them with you.

This is the one of the most frequent reactions to the information that we are from Poland. Since we crossed the Bosphorus and started to move away from Europe, people have known less and less about our country. And while in Turkey the name “Poland” rings a bell, in Iran, Nepal and India it is very rare to hear.

Most of the associations connected with Poland refer to Polish sportsmen. In Turkey, people mainly know the football players – our three players from Borussia Dortmund (Lewandowski, Błaszczykowski, Piszczek) and a few who play or have been playing for Turkish clubs lately (Głowacki, Małecki, Mierzejewski, Grosicki, Brożek). The name Szczęsny rarely appears, perhaps because its pronunciation may cause difficulties. In the rest of the countries we can hear names of the three players from Borussia Dortmund as well, but mostly of Lewandowski. In Iran, there additionally appears the association with volleyball. It is a quite popular sport there and in recent years the Iranian representation has played few games against Poland. Bartek Kurek is a well-known and very respected  figure who is also considered one of the best players in the world. The rest of Polish sportsmen are not very recognisable. Nonetheless, it is football that holds sway, and in other disciplines only pre-eminent figures are known.

Right after sportsmen we can hear about Wałęsa. Not only in Turkey but also in other countries this name appeared a few times. Mostly it is associated with Poland, sometimes with the collapse of communism, but usually without deeper knowledge of the history. However, once we were in Iran, an elderly man sitting in a park surprised us with knowledge about changes which took place in Poland and the figures connected with those events (eg. Władysław Frasyniuk). One of the common associations with our country is also World War II and Hitler’s invasion of Poland. Many people know that this concrete event is considered the beginning of the war. When one of the police officers in India learnt we were from Poland, he greeted us with a joke: “So didn’t Hitler kill off all of you?” Someone also knew a little about Solidarity, someone had heard about Gdańsk Shipyard and a few people had heard about communism and Poland’s dependency on Russia. In Serbia there were also questions on the other side: “Is Jaruzelski still alive? How is Kwaśniewski doing?” but that is a rare case. During the story about the history of Iran and the participation of the United States in this, Brzeziński’s name was mentioned. John Paul II was hardly mentioned but it should not be a surprising fact because the dominant religions in those areas are Islam, Buddhism or Hinduism. In North-West India we finally met the Christians but they differed from Catholic Christians so even the late pope John Paul II was not a first association for them. As for culture, Polański is recognisable. One Finn, who we met on our way, surprised us by knowing names like Kiślowski and Wajda. Apart from those names, no more Polish actors, film directors or writers are known or recognisable.

We may think that a lot of Polish names were mentioned but we should remember that this set of names was collected during 3 months of travelling. More often instead of recalling any names people tend to say: “Poland? That’s a beautiful country!”(when they want to sell us some products but know nothing about Poland) or “Poland? Where is it?” (when they do not offer us anything). Usually, it is enough to say “Europe” – because for Asians all the European countries are the same:  rich and ruled by white people. Most people associate us with cold weather, so the questions about temperature were often posed. Everyone also asks about the dominant religion in Poland and no one is surprised when the answer is Christianity, but most of Polish people are Catholic specifically. However, what they cannot understand is when we say that we don’t believe in god.  Here, it is obvious that everyone believes in something. Many people know Warsaw is the capital city but it’s the only city they know. Sometimes a more knowledgeable person asks if we belong to the European Union and if the euro is our currency. Few people know Żubrówka (bison vodka) and once in Iran we saw Wedel’s chocolate and everyone was surprised that it is a Polish product.

We have also discovered some wrong associations: Cristiano Ronaldo (perhaps because the name “Portugal” also begins with the letters “Po”),Vaclav Havel (not so far from Poland) and Helsinki (this one I cannot explain why). Of course we are often mistaken for Russians (Slavic appearance and language), sometimes for Germans and Americans (in some places the only white people about whom people have heard were Germans and Americans).

Nonetheless, we should not complain or be surprised. Most of the Polish people don’t know anything about Iran and have never heard about the existence of something called Iranian Kurdistan, so why it should be better the other way?

During travel it is good to mention a few facts about your own country and to learn something about the country you are visiting as well. And we are trying to do so.

*Spoken in Farsi, meaning: “Where is Poland located?”