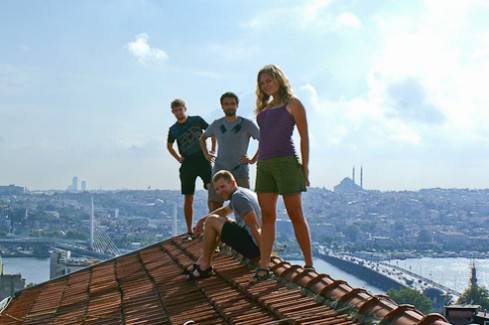 We are group of four students from Wroclaw. We start hitchhiking journey across the continents. There is a long way to go and there are many new experiences waiting us. We are going to share them with you.

Three months have passed since we set off on a hitch-hiking journey around the world. We have visited 15 countries, covered 16 thousand kilometers, hitched 118 rides and experienced many adventures. Therefore it is a time for a short summary of what has happened as yet. We set out according to the plan on 25th July as a foursome: Hania, Maciek, Tomek and Kuba. To the Orlen petrol station by A4 motorway near Wroclaw, where we started, came with us a number of friends. Right after twenty minutes they saw Maciek and Hania off, and after another ten minutes they said goodbye to Kuba and Tomek.

It took us one day to reach Budapest, and another two days to arrive in Istanbul. We left the Europe there, and our journey has begun for good. Crossing Turkey took us two weeks. On the way, besides Istanbul, we also visited Yedigöller National Park, where we saw a dead bear, the Cappadocia, the Sanliurfa with the oldest university (Harran University) in the world and the Kurdish Mardin. We drove a tractor-trailer, we learned how to play backgammon and we drank hectolitres of free tea.

Yet that is just the beginning of adventures. From Turkey we went into Iraq, a country where many people got going to out of our minds, and more precisely into Iraqi Kurdistan.

Hardly anyone knows that there is located an autonomous region inhabited and reigned by Kurdish people in the north of Iraq. It has been safe for twenty years in this area, and Kurdish people really care to make the world learn about their country and their painful history. We have not been shot in Kurdistan then, we have not been even close to be. We visited a village, where Mustafa Barzani – a leader of Kurdish opposition and future president – came from, and whence, during Saddam Hussain reign, several thousand people were snatched and buried alive. In addition we were in prison in a city of Sulaymaniyah wherein Kurds were imprisoned and tortured. We made friends with several police units and couple of troops, we slept over in the Kurds’ houses and we were fed with countless number of Kurdish delicacies.

In Iran we slept amongst Iranian families in parks and in the houses of truly inhospitable Iranian people. We ate the fish which jumped into our boat by themselves, freshly hunted pork that is illegal in Iran and recently picked watermelons, pomegranates and oranges. We drank non-alcoholic Iranian beer, as well as an illegally brewed homemade one. We swam in the Caspian Sea, in the Persian Gulf and in the incredible Badab-e Surt water terraces, where we arrived thanks to hitchhiking… on a donkey. We saw the ruins of Persepolis, the biggest bazaar of the Near East in Tehran, the Zoroastrian temple in Chak-chak, the oldest in the world air-conditioning system in Yazd, and the world’s second-biggest city square in Isfahan.

We resigned from going through Pakitstan, where, especially in Balochistan on the borderline with Iran, it is not safe for foreigners. Instead we flew out from Iran to Nepal. We went for a two-week trekking around Annapurna there. On the way we climbed up to over 5400 meters above sea level, where we got altitude sickness and saw the two eight-thousanders. In the south we visited Nepali jungle, wherein we not only met i.a. rhinos, king cobra, peacocks and jackal, but also we were canoeing amongst crocodiles and bathing with elephants. In India, squashed by others, we were going with the cheapest class of Indian railways, we visited the Taj Mahal, we saw burned corpses in the holy city of Varanasi by the Ganges river, we admired the Kangchenjunga mountain, which was considered for a long time the highest one in the world, and three other eight-thousanders in the distance: the Lhotse, the Makalu and the one and only – Mount Everest. Whilst we took a short trekking through the Indian jungle, we were walking on living root bridges and we were bathing in wild waterfalls. We were not let in from India to Birma travelling overland (yet for a half an hour, not quiet legally, we managed to cross the border), so we decided to fly out to Thailand, where we eventually reached Birma. The first day we were made to spend in borderline city, seeing that a road, which links it with the rest of the country, is the one-way road, and becomes the two-way road every second day. On the first day it was closed towards border, so we could not set off until the second day and just now we are sitting in a bus going to the capital of the country – Yangon. Further plans include returning overland to Thailand and visiting its attractions, as well as a south trip to Malaysia, Singapore, and Indonesia until we reach Australia, where we intend to arrive before the year end. Then we are going to visit New Zealand and South America.