﻿ Lonely traverse of Iceland. I did it! | Link to Poland
Previous Next

Home » Projects » Polish trip to… » Lonely traverse of Iceland. I did it! 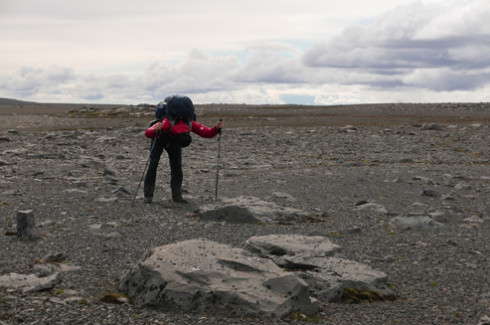 A 13-day lonely expedition is already behind me. Its objective was to walk from the northernmost point of Iceland, Rifstangi, to its southernmost point, Kotlutangi, in the record time. I did it!

I always thought of Iceland as a mystical place beyond my reach. I came up with the idea to walk through the island while walking the Scottish Cape Wrath Trail and it was growing in me for the next two years. I started preparing for the expedition in January 2015 and I didn’t slow down until the departure day. I was searching for and buying maps, training 6 days a week for 3 months, looking for experts on Iceland’s topography and convincing them to cooperate with me, learning information by heart and checking out the weather nervously. My objective was to set the world record in a lonely traverse of Iceland without any help from outside and the first Polish solitary pass through the island. The previous record belonged to Louis-Philippe Loncke, who covered the same distance in 19 days. I wanted to do it in 13 days.

The weather situation turned out to be quite bad. When I was already in Iceland I found out that it was the worst summer since 1979 and the highest temperatures on my route were recorded in February. I had to deal with low temperatures (10 degrees below zero), hurricane winds as well as constant rain and snow. This was to be my reality for the next two weeks.

Thanks to the people I contacted earlier I got to the north of the island, near Rifstangi – the most depressive place on Earth. I reached my starting point after midnight and I quickly hid myself in a tent to start my journey in the morning. The first day treated me very harshly because all the water reservoirs I could find on my map mysteriously dried up. I felt the first drops of water on my lips in Kopasker where I used the river by the road to restock. The same story repeated many times during my expedition. Another stage was an asphalt road to Asbyrgi and then towards the interior, through Myvatn, and to Nyidalur, Landmannalaugar, Skógar and Vik in the south, walking along the F26 road.

Natural obstacles piled up: rapid and deep rivers, snow-covered passages between glaciers, volcanic dust and constant water deficit. Sometimes I covered the distance of 52 km a day, carrying 23 kilograms on my back and fighting with the wind blowing 30 metres per second, which made pitching a tent impossible. When it was snowing, I had to remove snow from my tent every morning. This is how my July in Iceland looked like. I couldn’t come across worse weather. Beautiful northern landscapes turned into the monotony of greys and blacks quite quickly. The F26 road’s hard surface of crushed stone started to cause me some problems which at the later stage almost made me stop my expedition and I nearly returned to Poland on a stretcher. Somewhere in the middle of my journey I got a hip-joint injury.

Four kilometres before Nyidalur I wasn’t able to walk normally and it took me 3 hours to get to the chalet. I got there very late and I had to stay in the same place two more nights. Unfortunately, beating the world record was out of the questions because I used one of the buildings as a shelter. The first Polish traverse of Iceland could still be achieved though. After consulting a physiotherapist on a satellite phone I started stretching muscles around the joint and use acupressure. After two nights I was ready to go. My hip still hurt but not so much anymore.

“No plans will help you, even the most precise and well-thought-of ones. You have to remember that this is Iceland and you either accept it with everything it has to offer or you will fight a losing battle. Concentrate on each step, take everything in day by day, don’t look into the future and don’t go back to anything that has already happened. Enjoy Iceland to the fullest every time the island gives you its permission to do so.”

It’s a pity I heard it in the middle of my trip. Otherwise everything might have looked completely different and I wouldn’t have to stay in Nyidalur giving up my goal. Maybe my hip would not have to be strengthened and I would traverse other parts of Iceland with a smile on my face, completing the fastest lonely traverse in the world. Who knows?

Another stage was the road to Landmannalaugar, which is the last part of F26. Volcanic dust that was practically everywhere, no water and strong winds which, combined with rapid rivers on my way, could be deadly. The F26 road finished me off in every respect. I was physically exhausted because of the tiredness and weather conditions, mentally thorn by constantly going back to the failure with beating the record and slightly tired with the grey landscape, which spread before my eyes for as little as 15 metres. At the same time, it gave me huge satisfaction. I was glad I chose the safer option and I started to get used to the thought that it will be the first Polish lonely traverse of Iceland. When I reached Landmannalaugar I was finally smiling. Luckily I had a chance to let off the steam accumulated by bad experiences in the first hot tub I found on my way. I managed to relax and gather strength for the road.

I felt quite happy when I was leaving Landmannalaugar. Despite a strong need to commune with people after so many days of being lonely this place “attacked” me with the number of people. I couldn’t wait to be on my trail again, far away from the noise and hassle. On the first day I was to get to the Alftavatn Lake. Difficult climbs, the sun shining almost all the time, snow-covered passage of 8 kilometres and walking down towards the lake – I think it was exactly what I was waiting for all the time. It was one of the most beautiful views. I was sitting on a hillside for 90 minutes and I couldn’t stop looking around. It was only a rainstorm, which appeared on the horizon unexpectedly, that made me move. An hour later I reached my destination. I could stay in my tent, eat another portion of freeze dried food and go to sleep with a smile on my face. The next morning, rested and in an excellent mood, I set off. This time I was heading for Þórsmörk, having many rivers to cross and meeting crowds of people on the trail. Unfortunately, every time I crossed a river, I met two American girls, who, explaining they were from California, said they didn’t believe that the water could be so cold and inconspicuous rivers so dangerous. They entered the water wearing flip flops which were very quickly taken by the strong current. They must have been very expensive because the Americans, wearing full equipment (a backpack with chest and hip belts fastened), were bending down, trying to find their shoes in the water.

I walked along the trail, which at some point went through the area covered with volcanic dust and for a moment reminded me of the F26 road. This time the weather spared me and I couldn’t wait to get to the Thora Forest.

After Skógar I was walking on an asphalt road towards Vik. In Dyrhólaey I was greeted by Bartek Charzyński from Islandia4u, who took me to Reykjavik and gave me a truly royal welcome. In this way I finished my lonely traverse of Iceland. I didn’t manage to beat the world record as far as the speed is concerned but I’m still the first Pole who walked alone between the utmost points in Iceland (from coast to coast) covering almost 600 km. I was happy. I did it!

More information on: I o to chodzi  | FB