﻿ Museum of the Second World War -Link to Poland
Previous Next 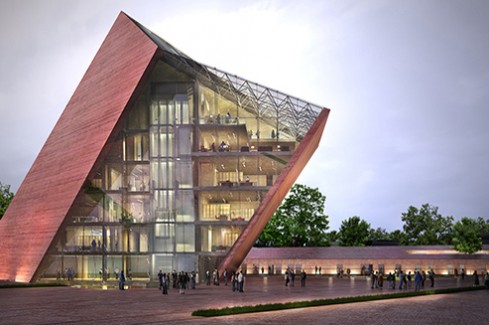 The Museum of the Second World War was formed on 26 November 2008. Gdańsk, the city where the war broke out, was selected to be the seat of the institution. The Museum’s future home is being built at Wałowa Street near the centre of the city. Its opening is being planned for 2016.

The Museum’s mission is to create a modern institution that narrates the full story of the war, the greatest catastrophe of the twentieth century. Furthermore, the Museum will serve as an important center of education, culture, and research. One of the  Museum’s primary goals is to impart to visitors the wartime experiences of Poland and the other countries of East-Central Europe. These were often different from what the people of Western Europe and of countries outside Europe lived through, and tend to be little known there. This Museum will focus on the stories of individuals, societies, and nations; military events will serve as mere background to the narrative about the everyday lives of civilians and soldiers, the terror of the occupation, genocide, and resistance to the occupying forces, diplomacy and great-power politics. The Museum’s approach will convey the uniqueness of the Second World War, an exceptionally lethal military conflict in which civilians suffered the most.

Since day one in its life, the Museum of the Second World War in Gdańsk has combined activities focused strictly on its museum function, consisting in accumulating the exhibits and processing information on them and pursuing conceptual work on the main exhibition, with research and education. Scientific conferences are also an important forum of the institution’s activity. Holding exhibitions and publishing activity complete the picture.

On 1 September 2009 on Westerplatte, during the celebrations of the 70. anniversary of the outbreak of World War II, the Polish Prime Minister Donald Tusk signed the Museum’s Foundation Act and officially opened the outdoor exhibition entitled ‘Westerplatte: A Spa – a Bastion – a Symbol.’ The exhibition is divided into four areas, which correspond to the chronological phases of the history of Westerplatte with its third part focusing on the defense of Westerplatte in September 1939. The educational path which was opened in July 2011 complements the exhibition and serves as a guide to the buildings of the former Polish Military Transit Depot located here in the inter-war period. Both, the exhibition and the educational path are in Polish and in English.

© Visualisation of the permanent exhibition of the Museum of the Second World. Tempora S.A.

© ‘Westerplatte: A spa – a bastion – a symbol’ exhibition. Dominik Jagodziński/Museum of the Second World War

More information on: Museum of the Second World War

We invite everyone to participate in the 4th World Gdańsk Reunion