﻿ Nuevo Mundo: Curitiba – the centre of Polish Diaspora in Brazil. Part.I | Link to Poland
Previous Next 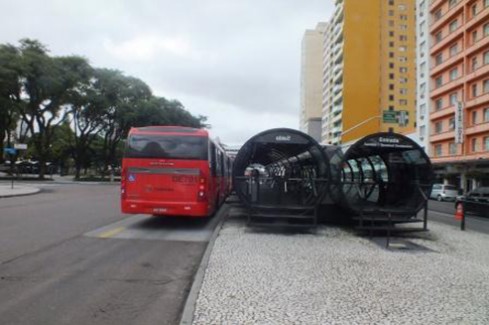 Following Polish footsteps in the countries of Southern America, it is not hard to miss Curitiba, a city that is the centre of Polish diaspora in Brazil. Three hundred thousand of Brazilians inhabiting the city in whose veins runs Polish blood.

Following Polish footsteps in the countries of Southern America, it is not hard to miss Curitiba, a city that is the centre of Polish diaspora in Brazil. Three hundred thousand of Brazilians inhabiting the city in whose veins runs Polish blood. Migration of our compatriots to those regions began in the second half of 19th century.

For the trip to that distant continent decided mainly the poorest men from Galicia, often having a small farmland of their own or no land at all. The emigration had economical basis. They came here by ships through the Atlantic Ocean. Along with them, moving to the same direction, there were Italian, German, and also Ukrainian emigrants. After arriving to Brazilian ports, they had another arduous road to pass. From the coast they had to climb difficult to pass and roads until they reached the plateau at around 800-900 m above sea level. Depending on the traveller’s wealth and the equipment they brought with them, they overcame this route in various ways. The poorest were forced to go on foot, whereas the richer ones, who had carts, had an easier task to do. It was not until the end of 19th century when the railway connecting Curitiba and the seaport of Paranguá was built.

The goods transported from the uplands were mainly the country wealth, such as coffee. The other way round, new settlers were transported along with their belongings. The colonists were given from Brazilian government huge, as for Polish idea, plots of 25 ha. Usually, they were covered with dense and unpleasant forest. After coming to Brazil, instead of typical farm work, Polish peasants were forced to laborious work based on rooting out the forest. Their worst enemy was, apart from the climate, the wildlife: dense tropical forests, minute mosquitoes, poisonous reptiles, and panthers. It took years before the first crops were harvested.

Today, Curitiba along with its suburbs has over 3 million inhabitants. I’ve visited it many times and came here again, after 20 years. I remember this city as thoroughly modern, well-kept, with high and colourful buildings, and greenery. It was a noisy, but harmonious, bright and friendly place. A city where I felt well and safe. Despite European appearance, I had no doubts I was in Latin America. Various forms of arts could be seen everywhere, in the streets and squares there were buskers, playing and singing melodious songs. Wherever I went, I saw busts and sculptures, colourful paintings on walls and the people I met were always smiling, cheerful and sociable.

This time, the first people I met in Curitiba have damped my delight of the city at the very beginning. They remind me of the meaningful statistics, which show that assaults, thefts and robberies happen very often. Curitiba is now one of the least safe cities in Brazil. This is a big surprise for me, as I used to think of Rio de Janeiro or Sao Paulo as the most dangerous and overwhelming cities. I was told to be careful and vigilant.

Bearing this caution in mind, I head to search for the traces of Polish culture. I have no problems with finding it, as I come across them everywhere. Admiring the city charms it is worth noting that one of its main architects was also a Pole Lubomir Ficiński-Dunin, born in Brazil in 1929. Thanks to him the city is functional and user-friendly for its citizens. Many inhabitants are proud of efficient public transport system. It is said to be the best and the most modern in the world. Indeed, traffics here are a rare view when compared with streets in other Brazilian, Polish or European cities. The city buses run frequently, having their own lanes and different highway code than other vehicles. In order to facilitate and speed up the service of passengers, they have built a special kind of bus stops. I have never seen anything similar, they are one of the city symbols. They have a very characteristic shape of a tube, with a separated way for passengers who are getting on or off, and whose paths never cross. The tickets are bought at the entrance to the terminal, at ticket-collector. One ticket permits you to have some bus changes, and in addition, it is very cheap. The time that each bus awaits is very short and the travel on the fixed lanes is quick. At the beginning, the way this system functions may seem complicated, but once you understand the rules, the journey becomes comfortable.

Other observations also give a lot of thoughts, for example, how to facilitate and make the street traffic safer without additional costs. The authorities of the city have secured one of the lanes for cyclists. It happens only on Sundays, when the traffic is the smallest and the bike-riders set off on trips. The lane that is the closest to the pavement is reserved exclusively for cyclists.

Many interesting and innovative solutions have been approved for roads outside the built-up area. One of the ideas is to limit the permitted speed, depending on weather conditions. When it is rainy and roads are slippery, the maximal speed allowed is 40 km/h and when the surface of the same street is dry, you can increase the speed up to 60 km/h. How simple logical it is. We should use it in Poland.

But let us move back to Curitiba and the Poles. There are a few organizations gathering Polish emigrants in the city. In the centre, nearby the oldest square, there is the seat of the oldest organization of Polish-Brazilian Association named “Tadeusz Kościuszko” that was established on 15th of June in 1890. It is located in a magnificent, old building. The interior is badly-maintained, but the enormous conference room and auditorium are very impressive. Today, the Association is governed by one of Polish families. In view of many Polish organizations, the cooperation between our compatriots living in Curitiba is not good. Just like in our country, in Curitiba there are conflicts, divisions, and peculiar deals. There are no chances of gathering the representatives of all organizations at one meeting. It does not favour a harmonious development of Polish community. Marek Makowski, the new consul, tries to normalize the situation. Not a long time ago, he was re-appointed for this position and with great enthusiasm he immediately began working. It is good that he can count on Polish missionaries’ help, especially that plenty of them are working there. One of the two Polish Catholic Missions in the continent has its seat in Curitiba. The head of the Mission is priest Zdzisław Malczewski, who has been looking after Poles in Brazil for around 35 years. He is the titan of work and the expert on Polish diaspora. Despite the vanishing interest, he continues publishing magazines about Polish situation in Brazil. The publications are bilingual, both in Polish and Portuguese, so that they are understandable for all compatriots living in this country. Most of them has given up using their native language. The function of chancellor of Polish Catholic Mission is fulfilled by its former superior, priest Benedykt Grzymkowski.

It is surprising, that the person showing me around the premises of the Association does not speak Polish. Such thing in the oldest Polish organization in Curitiba! It is the sign of temporary times. Everybody is in rush, everything changes. It evokes a reflection. On the one hand, it is a disappointment that the next generations born and brought up in Brazil do not know the language of their fathers, on the other hand, perhaps it is good that they assimilate to the environment. It is natural that the children and grandchildren of Polish emigrants become citizens of full value of their motherland and if they are active members in Polish associations and organizations, this can only mean that they are interested in the country of their ancestors. It is worth noting, that a great motivation to  regenerate Polish spirit took place in 1978, when Karol Wojtyła was elected to the papacy. It was then, when people of Polish origin living in Brazil felt as members of Polish nationality. It was the moment when Poles stopped feeling ashamed of their origins. They national consciousness increased, and people became interested in the country of their ancestors. They awaited for the arrival of the Pope and when he finally made it to Curitiba in July 1980, it was an important celebration. He was welcomes by thousands of people, among them dominated proud Poles. During the meeting, John Paul II gave them a painting of Black Madonna of Częstochowa, which was passed on from one Polish village to another, it has been everywhere where the Pope could not go. I had an opportunity to see him in the rectory of St. John the Baptist church of priests Benedykt Grzymkowski and Zdzisław Malczewski.

A big surprise is the fact that in the city, where many of our Polish compatriots live, there is no school, in which the basis of Polish language, history or culture could be taught. Among the generation of young Poles there is no demand for it. However, it is worth mentioning that since 2009 in the oldest university in Brazil, the Federal University of Parana, built in 1912, there is a course on Polish Philology. Many years of efforts to start this unique on the continent major has brought positive results. The course started on 140th anniversary of arrival of the first immigrants. There were more candidates willing to study Polish literature and culture than places offered by the university. There were 28 people competing and only 18 places were available. Among the candidates there were Poles and native Brazilians. The first graduates will leave the university in 2013 and will be actively participating in the development of Polish culture in Brazil. They will have many opportunities to show their commitment, as the cooperation between Poland and Brazil is deficient. Our compatriots regret they cannot use the Polish Television from the channel that has been created specifically for Poles, i.e. TVP Polonia. The signal of this television reaches our compatriots all over the world, except for South America. How to make young Poles interested in what happens in the country of their ancestors, culture, music and history of Poland? Somebody must have been careless about his duties! With intentions of delivering a piece of information about Poland to Brazilian Poles, I organize a photography exhibition called “The charms of Poland”.