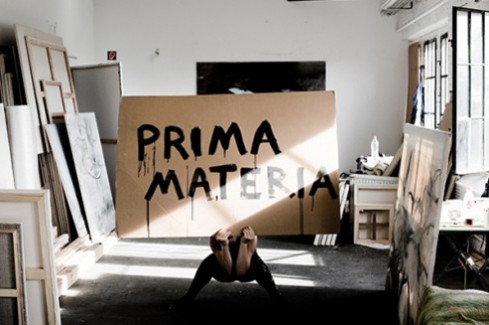 Currently two of your exhibitions in Berlin are open to visitors – of photography and painting. Which of those forms of artistic expression is closer to you? Do you see yourself more as a photographer or as a painter?

Painting and photography are two different kinds of expression.

Painting is a process that appears slowly and develops from the moment when the idea for a painting occurs, up until the very last brush-stroke. It is a projection of the world that comes from inside, which is an interpretation of my world view. It is an independent zone where everything is possible.

My photography is the caption of a moment. Here everything moves in a different pace than when you’re painting, and it forces you to react quickly. The theme depends on many factors – the model, light, mood.

Painting and photography are two different ways of viewing and experiencing reality that complement each other and create my world.

Women are the main motif in your paintings and photos. Looking at your work from 2008-2012 one can notice the way those women change – from being mysterious and observing, to being pugnacious, aggressive, a little bit masculine… What is the reason for this development?

I work in stages and choose the motifs that puzzle and move me at a given moment. That way of working is open to many new inspirations.

Back then I was interested in the subject of women. I approached it from many angles, from looking at the classical canon of beauty, to the evolution of the woman through the ages, to her status in modern times.

Men that have seen your work say that the women depicted are cold and unfriendly – they wouldn’t want to have a woman like that by their side… Does the modern woman distance herself from traditional beauty canons? Does she try to take on the role of men and handle life on their own?

Some of my older paintings may not be very accessible, but they were part of this project and helped to complete it. I think that if you want to understand a certain subject, you need to approach it from different angles.

I believe that the image of the modern woman is a result of a long evolution. Seeking refuge in traditional canons of beauty and taking on male roles depends on the person in question. I view it as an individual matter.

Or is it just a provocation? Like in your photographs – burlesque, tattoos, theatre, play… Maybe the modern woman accepts these roles to hide her sensitivity, vulnerability, her, so very unfashionable, weakness? Maybe she’s just protecting that what is spiritual and most valuable?

The modern woman possesses sensitivity and vulnerability, but her public image may be different. The outside doesn’t necessarily have to correspond to the inside. It is even possible for the proportions to be utterly out of balance, when for example a provocative appearance is paired with a gentle disposition. In my „Berlin relatives” project I worked with different people from burlesque, theatre and tattoo scenes. They were people who amazed me with their personalities.

Can you tell us how the “Berlin relatives” project started? Was it easy to convince the heroines of the portraits for photo sessions? How long did you work on this project?

It all started with a lecture about Charles Bukowski, where during a break burlesque dancing girls appeared. Then the rest followed as if by a domino effect. I met a variety of artists from the scene and so forth … With every new person, different performances and cultural events, new people kept popping up. I didn’t search for models on the Internet, because I wanted to have direct contact with them from the very beginning, also first impressions are very important to me. I chose a lot of models, but not all came to the session. Anyhow, when someone failed to appear, suddenly somebody else popped up. It was a very fascinating experience. Usually, when there are no specific expectations, we get the best result. I worked on the “Berlin relatives” project for about a year.

And what about your „Prima materia” series? Are they a continuation of the painting story about women?

Prima Materia is a concept that originated from the art of alchemy. That project is a painted/drawn one. The most important thing for me there was the way a painting was built: composition, light, movement. Based on that I created paintings with the themes: landscape, animals, figuration. Actually only two paintings depicted women: one, „Carpe diem” is a portrait in a turban, and „Lux”, which was inspired by Rembrandt.

Is the greyish-pastel colouring of your works a hint at your roots? At Silesia (a region in the South-West of Poland)?

The colouring is one of the aspects linked to my background. It is a form of aesthetics that stems from my roots. I very much like the Silesian feel.

Which triggers your imagination more, Berlin or Ruda Slaska? Where do you find your inspiration?

My imagination is triggered by my surroundings. I am an open-minded person and I like to get to know the world and its inhabitants. You can find inspiration anywhere. Sometimes there are impulses that I can visualize very quickly, and other times they grow and need time. There are no rules there.

In painting I greatly admire the Renaissance and old Masters.

What will be the subject of your series?

One of them will be connected with Silesia. I think it is an amazing region with a fascinating history and atmosphere. Besides, for me personally it is a return to my roots as well.

Others will broach socio-economic topics.