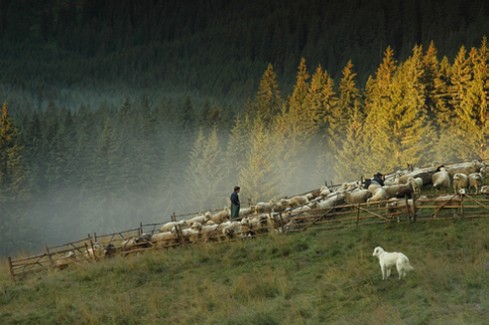 Autumn morning, I’m sitting in the kitchen and sipping coffee. Suddenly I hear gentle buzzing, with time the sound becomes clearer. I look out the window and see a flock of sheep moving along the road towards the nearby meadows. Small bells tinkle hung on the neck of each sheep. Ah, the owner is leading his herd to the pasture. Grazing season, which traditionally runs from April 23 (St. Wojciech day) to September 29 (St. Michael the Archangel day) is already completed – the sheep descended from the Tatra mountain pastures. Now they are driven only on the foothill meadows.

Pastoral customs, traditions, techniques and equipment came to the Polish mountains from the south. They were strongly influenced by Vlachs – nomadic people coming from the Balkan area, who in the early Middle Ages began centuries long pilgrimage to the north. Nomads assimilated with the inhabitants of the Carpathian range and taught them new skills. Pastoral way of life came upon a breeding ground – difficult natural conditions (harsh climate and poor soil) favoured more animal husbandry than cereal farming. Shepherding started to develop in the Tatra and other Polish mountains.

Each owner wanted to send his sheep to the mountain pasture for summer. It would entail leaving the household for several months, what was impossible. Therefore the function of baca (the main shepherd) was established – a man to whom farmers entrusted their flocks for summer time grazing. Baca was choosing some helpers – younger shepherds and set off to the mountain pastures owned by the village. Walking to the pastures called redyk could last even several days, depending on how far from the mountains the village was located. On a pasturage shepherds lived in a wooden hut called bacówka. Apart from grazing they were protecting sheep from predators or getting lost and manufacturing products from sheep’s milk. The best known are three types of cheese – oscypek, bundz and bryndza. Grazing was terminated with autumn redyk – sheep descent from the mountains. It was a very solemn event, accompanied by singing and music. Then the main shepherd settled up with sheep owners and returned them their flocks. Children welcoming redyk were receiving little pieces of cheese in the shapes of animals. Many traditions and superstitions associated with the pastoral season come from a borderline between religion and pagan beliefs. They are subject of a number of ethnographic research nowadays.

What about shepherding in the Polish mountains today?

History of individual pastoral areas and its influence on contemporary sheep grazing caused diversification of shepherding in different regions of Poland. Idyllic view with sheep in the mountain pastures is not as common as it was in the past. Nevertheless we can still meet shepherds or even visit their huts while hiking on the mountain trails in Gorce, Beskids or Pieniny. In some areas (eg in the Bieszczady Mountains) the aim is to renew the tradition of pastoralism.

In the Tatra Mountains, where shepherding had been completely liquidated due to the nature conservation in the 70’s, it was decided to restore grazing. Decisive influence had cultural issues – perennial relationship between the highlanders and the Tatras and richness of traditions and customs as its effect. In 1981, shepherding returned in a form of so-called Cultural grazing of sheep and cattle in the Tatra Mountains. What does it mean? Under agreements with the Tatra National Park highlanders can graze sheep on some of the clearings. They must, however, obey several rules including speaking in a dialect, wearing the original highlander outfit, whether be assisted by traditional herding dogs – the Polish Tatra sheepdogs. The are many more requirements, but thanks to them we can  learn more about old customs and try products prepared according to original recipes.

Extremely interesting event is the Carpathian Sheep Transhumance organized for the first time in 2013. It is an international project aimed at meeting people involved in shepherding across the whole Carpathian range linked together with an exchange of experiences. This is the traditional wander of shepherds and flocks through the mountain area of the Carpathian countries – Romania, Ukraine, Poland, Slovakia and Czech Republic. The trail is about 1,200 kilometers long (10-15 kilometers a day) and takes place between May and September. The wander is accompanied by various events.

Dusk, the day is slowly coming to the end. I hear the tinkling sound again… The sheep are coming back to the pen for the night.