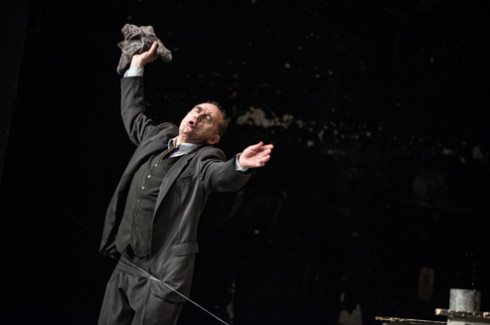 This is the third season of United Solo Europe at Teatr Syrena in Warsaw, Poland. This year, the festival opened Jan Peszek with his performance “Scenario for a Non-Existing…” This legendary show has been performed for nearly 40 years.

United Solo Europe was created as a program promoting high‑quality solo performances to international audiences in Europe. Solo artists from around the globe come to share their inspiring stories, cultural uniqueness, and diverse aesthetics. This program expands the aspirations and goals of the New York‑based company, United Solo.

This is the third season of United Solo Europe at Teatr Syrena in Warsaw, Poland. The company, based at Theatre Row on 42nd Street in New York City, brings its top-notch solo shows overseas. In previous seasons United Solo Europe has hosted, among many distinguished artists, the two-time Laurence Olivier Award winner Fiona Shaw, and Regina Advento, a member of Tanztheater Wuppertal Pina Bausch. This Spring, the artistic director of United Solo in New York, Omar Sangare, in collaboration with the managing director of Teatr Syrena, Jakub Biegaj, and the artistic director of Teatr Syrena, Wojciech Malajkat, selected new shows and created another week-long theatre festival directed toward European audiences.

The shows will be presented every night between June 15 and 21, 2015 at the main stage of Teatr Syrena, a premier three-hundred seat venue located in downtown Warsaw. The showcase offers a variety of forms, including drama, comedy, musical, experimental theatre, physical theatre, Japanese style of Butoh, and pantomime based on the technique of Marcel Marceau. Most of the styles will be explored additionally through the series of workshops taught by the solo performers. Audience members and workshops’ participants will experience the richness of these theatrical styles in both the theatre venue and rehearsal space. This overseas showcase in June precedes the major ten week run of United Solo scheduled between September and November in New York City.

This week you have still a chance to watch:

Anna Serafinska in “Love Stories” from Poland. Vocal virtuosity, with a special appearance by Omar Sangare. June 21, 2015 at 8.00 p.m.