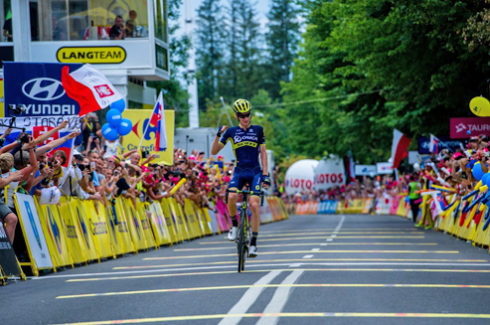 The 6th stage in the 74th Tour de Pologne – UCI World Tour, from Kopalnia Soli “Wieliczka” to Zakopane for 189 km, featuring five 1st category GPM primes, the last one at 9 km from the arrival. This stage victory went to Australian Jack Haig (Orica-Scott).

There were lots of surprises and plenty of thrills today in Zakopane for the first of the two mountain stages that will close out this edition of the Tour de Pologne. The stage victory went to Australian Jack Haig (Orica-Scott), who executed a stupendous forcing in the final which allowed him to gain a good margin on the best group and arrive all alone with his arms up in the air at the finish line. In the lead group’s bunch sprint, second place went to Holland’s Wout Poels (Team Sky) and third to Luxembourg’s Bob Jungels (Quick-Step Floors).

“I tried at the start of stage 3 and almost made it; unfortunately I came up 900 metres short. I’ve had really good legs here in this race, I’ve been training super hard at home in Andorra and I really wanted to try again today, so I’m super happy today paid off, and we will try again tomorrow, see what happens. This is my first win this season and my first pro win, so I’m super, super happy, and hopefully this won’t be the last win. Tomorrow we will try again and hopefully it will be me and Adam Yates there again and we can see if we can move each other up in the GC; whether that’s Adam taking the jersey, of if I can move up, we will play it by ear,” says the stage winner Jack Haig.

Peter Sagan lagged behind today and showed serious signs of difficulty as he fell out of contention for the final victory, while the other top riders were left to scuffle to capture the lead in the general.

“It was a tough stage, not really one that suits riders like myself. Rafal tried hard and gave his best. He is second in the GC with only six seconds distance from the first place. Tomorrow, we need to ride the best way we can to help Rafal win the Tour de Pologne” says Peter Sagan.

The yellow Carrefour jersey has been passed to the shoulders of Dylan Teuns (BMC Racing), winner of the third stage, who now is in the lead with 6” on Polish hometown idol Rafal Majka (Bora-Hansgrohe). There are 10 riders crowded into a 30” span, so tomorrow’s final fraction will also be the reigning stage, on the gruelling and spectacular circuit in Bukowina Tatrzanska, which promises to continue delivering thrills all the way to the end.

“It’s really good for me, the team did a really good job for me today but it was really, really hard to keep up with the GC riders in the end, and we knew that we could give Jack Haig a bit of time because he was 2 minutes down in the GC. Now he’s back in the game, too. But that last climb, it was really hard for me. It split the group into two parts, maybe 5 in front and 5 behind, and I was in the second part, but I reeled it back in on the descent. It was hard to control everybody. Once I made a break and then there was a gap, but I saved myself on the descent and by then I was at a good point. In the final I had the responsibility of keeping the gap to a minimum, and when the sprint started I just hung on in the last position. For tomorrow: it will be hard. 10 guys within 30 seconds or so of each other; all of them will be ready to fight tomorrow, I’m sure. We will see. I need my team, I think they will be ready to fight for me, and fight for the jersey. I will be ready to defend the jersey and I will give everything tomorrow,” says the new yellow jersey Dylan Teuns.

Special guest on the finish line in Zakopane was 2014 World Champion and much loved national idol Michal Kwiatkowski (Team Sky) and the President of the UCI Brian Cookson, who presided over the entire prize ceremony and who tomorrow will participate with Czeslaw Lang in the race for amateurs sponsored by the Tour de Pologne, the Tour de Pologne Amatorow.

“Actually it’s fantastic to be here at Tour de Pologne. Of course it’s pity that I can’t participate even because the course is a bit different from last year which is great but still as ambassador of Nutella Mini tour de Pologne I could be at the start with the kids. I have a special liaison with this race. I grew up watching this race and when I was a kid I participated in Mini Tour de Pologne. It’s a great initiative, there aren’t a lot of races where the kids can ride their bikes on the same course of the professional riders. It’s also a kind of family day where all the families come to follow the kids and enjoy a day at the race and cheers for their favorite champions. Today the stage was really nice and spectacular. Here in Zakopane there is an amazing atmosphere but I have to say that each stage was exciting and with a lot of public and a high level of riders.I think it’s nice to have 10 riders in less then 30’’ with one stage to go. Tomorrow it will be a show. My favorite? Beside my teammate Wout Poels I think Majka has a fair chance to win the race” says Michal Kwiatkowski.