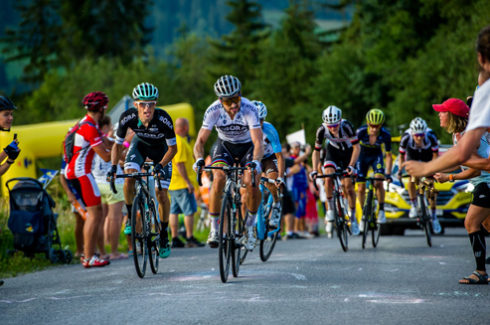 This Tour de Pologne was hard fought up to the last metre. The seventh and last stage on the hard circuit in Bukowina Tatrzanska covered 132.5 km with 6 gpm primes, delivering plenty of thrills. Stage victory went to Holland’s Wout Poels (Team Sky) who got the best of the group of 5 riders in this Tour de Pologne.

The seventh and last stage victory went to Holland’s Wout Poels (Team Sky) who got the best of the group of 5 riders in this Tour de Pologne. At the end of the battle Belgian Dylan Teuns (BMC Racing) managed however to defend his place, calling on all his energy to hang on to the yellow Carrefour jersey he captured yesterday in Zakopane, deservedly winning the 74th edition of the Tour de Pologne – UCI World Tour. Applause also goes to the rest of the competition, especially the Pole Rafal Majka (Bora-Hansgrohe) and Wout Peols who were second at 2″ and third at 3″ respectively in the final classification; today they figured as the most active participants in the group of top riders, but this was not enough to steal the jersey from a fantastic Dylan Teuns. The Belgian from team BMC Racing seemed to be having some trouble on the second-to-last climb of the day, but then he managed to catch up to the best of them and on the climb towards the finish line in Bukowina, helped along by his team mate Tejay Van Garderen, he bit the bullet and resisted wonderfully, catching up to the fastest without ceding a metre to Majka or Poels all the way to the finish line.

It was a victory of legs, heart and higher intelligence that proves the maturity this rider has reached. It’s a golden moment for Dylan Teuns, 25 years old, who, in the last 12 days between Belgium and Poland has obtained 5 successes, with Tour de Pologne becoming the most prestigious victory in his career. Tour de Pologne which once again has confirmed its tradition of shining the cycling scene’s spotlight on young promising talent. Once again, it is Belgium in the golden annals of the Tour de Pologne: Teuns follows on the heels of his fellow countryman Tim Wellens, last year’s winner.

“It was really a hard day, the guys rode hard from the very beginning, we took control from the start, but a lot of teams came to make it hard for us. We had to wait until the final, and in the final, yes it was really hard, the pace was really high, but I knew I only had to follow the main GC guys. At one moment I was a little bit behind, and I was really lucky I still had a teammate, Tejay Van Garderen with me. It was really incredible, what he did to bring me back. And in the final climb I just knew I needed to go 2 kilometres full gas, on the limit and over the limit to keep the jersey and that’s what I did. It’s an amazing feeling to win the race. I had a great week in Wallonia last week but this is a higher level it’s an incredible week for me and it’s a big victory for me to win a world tour GC, it’s a big step in my career,” says Dylan Teuns, who as winner on the podium raised the trophy –Sports Evolutions – by Italian artist Mirko Demattè. He also received a Hyundai Tucson as part of his prize.

“Yes I did the best I could and sometimes it’s not the win, but I tried, really I tried today, on the last climb. Maybe it was too late because it was not so steep, and the riders with me were not so many seconds behind: Kelderman only 4 seconds, Poels… it’s like a lottery, it’s not easy. I tried 3 or 4 times, and in the end I’m 2nd by 2 seconds, but I’m so happy, because the team helped me a lot today. The world champion worked for me and they all did a great job, thanks to all of Bora Hansgrohe , we will try again next year. I’m so happy to be racing in Poland. Every time I’ve raced here I’ve been on the podium and I’m so happy,” says Rafal Majka, winner of the 2014 Tour de Pologne and second in this edition.

“Yeah, it was really nice, I moved up onto the podium, and I won the stage, and it was really nice. Unfortunately not the GC, but my form is coming back so that’s good for the upcoming races. I felt really good at this race, I trained very well, I was struggling with a bit of a knee injury earlier this season so it’s really nice to be back on a good level and here in Poland it’s really nice to race, a lot of great roads and a good atmosphere, it’s really nice. My next race is the Vuelta so 2 weeks rest and then off we go again. I’m leaving Poland with a really good feeling, and it was a good race,” says Wout Poels today’s winner and third in the general.

“I was savouring being out front, the situation in back was better for Rafa if he could have someone in the front so that was the tactic. After the starting kilometres it was a little different, in the end I put in a lot of effort without any result. It was a hard Tour of Poland but still it was good week, Rafa was 2nd in the GC. A lot of people came here from Poland and Slovakia and we had a lot of energy from cheering fans,” says the world champion  Peter Sagan, who, after a rough day yesterday orchestrated a great stage where he launched an attack from the initial kilometres before ceding in the final.

Peter Sagan had a good Tour de Pologne, winning one stage and wearing the yellow leader’s jersey and ended up coming away with the white Hyundai jersey for the points classification. In other classifications: Italian Diego Rosa (Team Sky), in a break for many kilometres today, captured the cyclamen Tauron jersey for the gpm. Holland’s Bert-Jan Lindeman (LottoNL-Jumbo) won the blue Lotto jersey for the most active rider in the group. Rafal Majka clinched the Lotos classification for the best Pole rider. Team Lotto Soudal won the team classification.