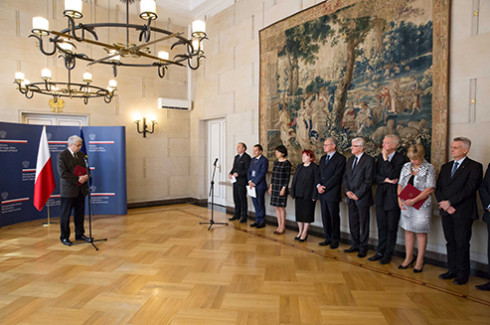 “I’m glad to appoint a man who will be representing Poland at a major organisation,” Minister Grzegorz Schetyna said at a ceremony to present Professor Jacek Purchla with the act of appointment for President of the Polish National Commission for UNESCO.

The chief of Polish diplomacy emphasised the importance that the MFA attaches to the Commission’s work: “We fully appreciate the Commission’s efforts to promote Polish science, education and culture abroad, as well as raising awareness of UNESCO (United Nations Educational, Scientific and Cultural Organization) and its activities.”

The minister pointed out that the Commission’s work adds value for the MFA in its efforts to give Poland a high profile within UNESCO and the United Nations, adding that the credit for that also goes to Professor Jacek Purchla, who up until now has served as the Commission’s Vice-President. Referring to Poland’s membership of the World Heritage Committee, Minister Schetyna underlined that it is a “great honour but also a great challenge for our country; a chance to promote the knowledge about our cultural and environmental heritage.” He also called for the continuation of measures to establish a network of national commissions in EU states.

Thanking for the nomination, the new president of the Polish National Commission for UNESCO stressed that UNESCO’s sheer thematic variety and Poland’s membership of the World Heritage Committee pose a challenge to him. “I’m honoured with the nomination,” said Professor Purchla. “The diversity of UNESCO’s focus is a challenge for us, and UNESCO is a globally recognisable brand,” he added.

Professor Jacek Purchla is a graduate in art history and economics, and a specialist in cultural heritage and the history of cities. He was director (and the founder) of the International Cultural Centre in Krakow. In his role as the president of the Polish National Commission for UNESCO he succeeded Professor Andrzej Rottermund.

Minister Grzegorz Schetyna also presented Minister Daria Lipińska–Nałęcz with a decision to appoint her to the Commission.