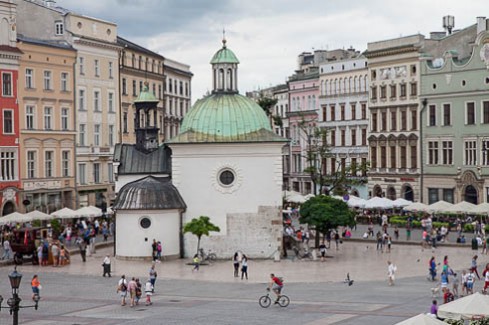 For the second year in a row Krakow has been named as the best city break destination in Europe.The Polish city received the highest consumer rating on holiday review site Zoover and hence wins the Zoover Award for Best European City Trip 2015.

The Polish city has won the annual consumer prize with an average rating of 8.8. On 13th January, it received the accompanying award on the opening day of the Vakantiebeurs 2015 (Dutch Travel & Tourism Fair).

This means that Kraków has earned the Zoover Award for best city trip. The Zoover Awards are accredited based on consumer reviews. In total, nearly 60,000 reviews were taken into consideration during 2014.

According to Martin from Zoover, Kraków is a definite must: “Kraków is an incredibly beautiful and atmospheric city, it surprised us tremendously. The charming Jewish Quarter, the welcoming Market Square with its many stalls, café terraces and beautiful cloth hall and above all the splendid medieval buildings.”

In addition to the highest overall rating, Kraków also has the highest score for four and five star hotels. The city’s atmosphere in particular is much appreciated receiving a rating of 9.01, making it the highest rated city in the top 10.

The Spanish city of Seville takes second spot with a rating of 8.63 followed by Venice, third with 8.60. The culture in Seville is obviously greatly valued with a rating of 9.05. Venice certainly doesn’t disappoint when it comes to culture with a staggering score of 9.06.

The top 10 includes two Italian cities and three from Spain. Siena enters the top 10 for the first time, as does Granada. Berlin haven’t made it into the top 10 this year.

Of all the Dutch cities, Maastricht does best. With a rating of 8.51 they even manage to get into the top 10 best European city break destinations. The reviewers agree that the atmosphere in this city in Limburg deserves the highest rating with a score of 8.88.

Zoover is the biggest holiday review site in the Benelux. With 185 million visitors every year, Zoover is for many travellers the first port of call for a successful holiday or day out. In the Netherlands, Zoover also operates the labels VakantieReisWijzer, weeronline.nl and Meteovista. Zoover has websites in 25 countries. The website contains more than 2.6 million reviews and more than 356,000 accommodations in more than 45,000 destinations worldwide.