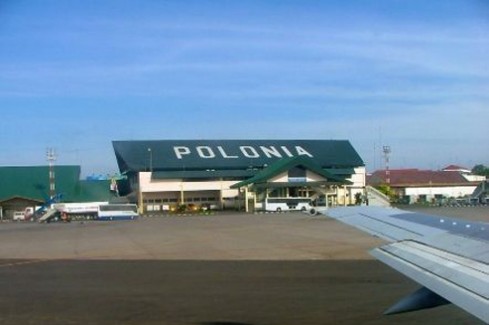 First and foremost, Medan is the biggest city in Sumatra but it also is definitely the most interesting one, which is located on the northern coast of the, much larger than Poland, tropical island.

Like many cities on this extensive archipelago, it was also governed by a Sultan and the area falling within its jurisdiction was called Deli. The not so glamorous, according to our European standards, palace can be visited every day in the centre of the old part of the agglomeration. The city itself is an interesting melange of a few different cultures and religions coexisting on a seemingly small area. Amongst the many Christian churches of the native Bataks and Indonesian Chinese, stand widespread on the archipelago mosques, Buddhist temples, and, unique in this part of the world, completely Indonesian, and not Hindu-Bali as you might suppose, style Hindu temples.

For Poles, the city is a kind of discovery of its own, a sort of dicovery of our own little Plymouth Rock, because of the familiar sounding district in the broad, city centre. This district, one of the few Polish inflections on the Indonesian Republic, is called Polonia and it has its beautiful Polish history. So, what is its Polish side? Because it certainly is not the number of Poles living here. It’s limited to a small, close-knit community located in Djakarta and the capital Java and the constantly increasing number of the tourist business employees on the popular island of Bali.

But let us get back to Sumatra and the Polish plotline in the history of the city of Medan. It reaches far back, as far as 150 years, and has its beginning, as you could imagine, somewhere by the Vistula river. Poland, which was at the time under annexation, trying to regain its independence during several national uprisings. Unfortunately, neitherthe year 1830, nor 1863 brought independence. Instead they caused an unprecedented scale of post-uprising emigration. On the wave of that emigration fate has thrown a downtrodden Pole, Baron Michałowski, on Sumatra. In the foreign land he shared the same fate as tens, if not hundreds of thousands of people like him, running from post-uprising repression of the occupiers. Most of the patriotic runaways travelled to London or Paris where they have created proudly remembered organizations such as the”Czartoryski Camps”, the “Hotel Lambert Club” and dozens of other patriotic emigrational organizations. But there was also a group of emigrants that chose the less popular spots on the map of Europe such as the land of today’s Netherlands. Michałowski settled there, but because he was a real traveler he was thrown overseas to the place called the Dutch East Indies. After reaching Sumatra, in 1872 the Dutch administration gave hima large patch of land, with the intent of growing tobacco. Sentiment, patriotism, and longing for land drove the Baron to call his overseas goods Polonia. He wasn’t extra original in this choice either. Up to this day in the area of Istanbul there is a rather prosperous settlement Polonezkoi and in the United States there are numerous Warszawa’s, Puławski’s and Kościuszko’s. But what’s most important for Medan, the patriotic idea of Baron Małachowski fitted the phonological taste of the local residents, and even after Małachowski’s plantation was gone they still called the surrounding areas Polonia. The terrain of the Baron’s field became increasingly attractive in the logistical sense and that the Dutch decided to build the first civilian airport in Medan on it. You can imagine that it was christened Polonia and from that time all of the travelers to Sumatra via Medan are always welcomed by Polonia. With time Medan grew and the former suburban airport found itself almost in the centre of the city. Without surprise it was the beginning of the end for the Sumatran Polonia. In the summer of 2013 the last planes appeared on the landing strip of the airport. A bigger Kualanamu airport was opened and and the historical Polonia was taken into governing by the Indonesian Air Force Garrison. But still, a small city park, a small hotel and a neighbourhood supermarket proudly bare the name given by Małachowski, making the Sumatran Medan the most Polish city in Indonesia.