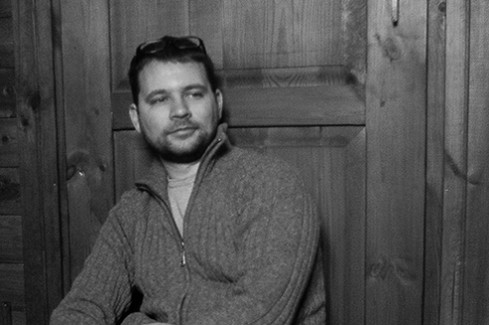 Interview with the author of the book “My Poland”, a passionate Dutch photographer who presents a romantic view of Poland.

When did you start your journey in Poland?

From a very early age, I’ve been fascinated by the eastern block countries. Back then, you would hear the term “iron curtain” quite often on the news. Being a child, with a vivid imagination, what you’d visualize was an actual iron curtain stretching across the land. I often tried to picture what people were like on the other side. These images of “the other side” I had in mind showed a completely different world.

Roughly around that time there was a Dutch band, Klein Orkest, which sang a song called “Over de Muur.” Although the song was about the Berlin wall itself, and people living on the either side of it, the lyrics could be applied to the Eastern Europe – Western Europe relationship in general. What I appreciate most about this song, is that it never tried to favour one side over the other.  As the state of affairs began to change rapidly, you would hear the name of Lech Walesa more and more often on the news. I learnt his name by heart, even though at that age I don’t think I fully realized who he really was, other than that he was Polish, and had something to do with freedom.

Later, when the Berlin wall was being brought down, I was sitting in front of the TV looking at the scene where an excavator was tugging at the concrete with people sitting on top of the wall hitting it with hammers. In hindsight, I can appreciate the symbolic nature of that situation, where something that embodied repression was used to tear down the wall. Despite the humble age of eleven, the instant the crack in the wall became big enough for hands to shake was very emotional to me. Years later, I read “Wojna polsko-ruska” by Dorota Masłowska (a Dutch translation of course). I also saw an interview with her, conducted by a Dutch writer, which revived my interests, and made them more Poland-specific. Shortly after that, I met a Polish girl with whom I fell deeply in love. That was in 2007; the same year I visited Poland for the first time.

You have a special connection to Wroclaw – city where you took lessons of Polish language. Could you, please, explain why you chose to go to this city?

At first, it wasn’t a conscious decision to visit Wrocław. My first trip to Poland was with my girlfriend who grew up in Poland,so we came to see her parents. Over the years we’d visited Wrocław many times, and I got to know and love the city.

You  do a lot of portrait photography. I am curious how people react when you  them on the street and ask if you can take picture?

It took me a long time to muster enough courage and language skills to approach people. From my experiences in Holland, I gathered that people’s reaction may range from irritation to even hostility sometimes. Much to my surprise, this wasn’t the case in Poland at all. People react in a friendly and polite way, often asking why I’d like to have a picture of them. Because I always address them in Polish, the issue of the photograph becomes easily forgotten. Instead surprise and curiosity come into focus. The most interesting reaction for me is the one of disbelief when I tell them I study Polish because I love the country and the language. They say: “You love Poland? But why?”. I answer every question they have as openly as I can. I think this interaction before taking the photo is something that really adds to the portrait. I also have a habit of shooting only one photo. When I’m done, I always hand in my business card so that they can contact me if they want to have the picture.

Could you share your plans for the future with our readers?

On top of my agenda, I have a plan to publish a book revealing my view of Poland, a very positive one I might add. I hope to go against the grain of  all the negativity which a certain group of politicians spread around, and which, sadly, is present on the news in both our countries way too often. I’m still trying to find support for bringing this book out in a way that it’s affordable and interesting for everyone. My other idea is to move to Poland for some time in order to improve my Polish, and to get closer to the passionate subject.

Is there any special message which would you like to share with Polish people living in the Netherlands?

Yes, we need you here! Not only for economic reasons. We share a European identity which is often too easily forgotten. These last years we’ve had more freedom of movement between countries than ever before. We can be proud of our own traditions and at the same time enjoy our common European heritage. As you can see I’m not making any attempts to hide that I’m a European patriot. And before I forget I would like to ask all Poles in Holland with cooking skills to open a Polish restaurant. We have one Polish restaurant for 16 million  people in Holland. This is really not enough for such a wonderful, tasty and diverse cuisine.

A few weeks ago you published the album “My Poland” which shows a very romantic view of this country.  Your point of view is quite different from that of the other photographers. Could you explain what inspired you to choose such a direction?

My view of Poland is a very optimistic and romantic one. I won’t deny that  there are things that could be improved, but I’m confident that they will be. When one day I decided I would really like to do a project about Poland which could  promote the country and its people, I realized that the  answer was right in front of me. All I needed to do was to document my passion. I strongly believe that the more you love your topic the better you perform.

I know you spent this Christmas in Poland. How was it? Have you noticed any major differences between Dutch and Polish Christmas celebrations?

Actually, this year will be the fifth time I’m spending Christmas in Poland. I would say that the biggest difference is related to tradition and family. You can notice it much more easily that when you celebrate Christmas in Poland that food is a part of  the tradition, as opposed to Holland where food has become more or less the theme of the holiday. Of course, in Poland religion still plays a much bigger role. When I saw long queues for entering a church for the first time,  I was truly amazed.

To whom exactly do you dedicate this album?

I would like to dedicate those photos to the country that throughout its history has seen a lot of grief and at the same time has produced so many inspiring people. But most of all, I dedicate it to the Poles and their never-ending hospitality, and for constantly aspiring to a brighter future.

On some of your photos you show grey but at the same time really beautiful Polish scenery. What did you feel while taking such pictures?

What I tried to document in those photos is a feeling of longing and nostalgia. There’s a double-layered message in those photos. I can never decide  if they represent the good or bad times that have gone by. For example, that building was magnificent when it was erected and now it’s falling apart, which evokes a feeling of nostalgia. On the other hand, you can also say that the building is now in ruins because the regime was too busy falling apart to care for that building. On the whole, I can see that Poland is changing and such street views are disappearing rapidly. Some buildings are nicely renovated, others need to be taken down because they are beyond saving. A lot of pictures I have in my collection couldn’t be repeated now, since those buildings look amazing again, a case in point being Hala Stulecia in Wrocław. I still think that it’s important to document how those buildings and street scenes look as these photographs give an account of how the country develops.

You are currently studying hard to take the national exam in Polish (B2). How difficult is Polish language?

For a Dutch person it’s hard. If I had known how hard it really was in the beginning, I would probably have never started. Also, the fact that I’m dyslexic makes the writing an extra challenge. However, I have a really wonderful teacher in Wrocław. We still do 2 Skype  lessons a week and I meet up with her when I’m in Wrocław. I’ve had  lessons with her for 3 years now, and wouldn’t have got to where I am now if  it hadn’t been for those lessons. What I learned is that you need a teacher who knows how to teach Polish. I had a couple of classes in Holland once, and the teacher just printed out all verb groups for us (including ones that are hardly used anymore). And then asked us to study them. If, as a teacher,  you’re aiming to have smaller groups, then this is a very good tactic since you scare people away with such methods.

The interview has been originally published in the Bulletin of Polish-Dutch Cultural Association.