﻿ New books on Polish-Indian relations | Link to Poland
Previous Next 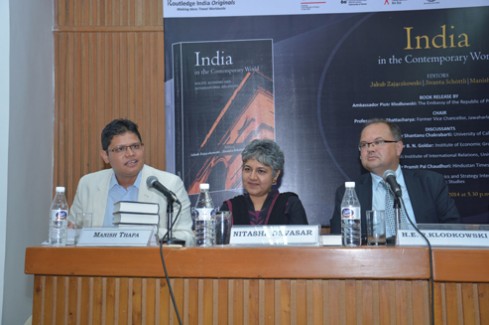 On the occasion of the 60th anniversary of diplomatic relations between Poland and India commemorated in 2014, Polish and Indian think-tanks and academic centres have published two interesting books in English devoted to Polish-Indian relations. Their promotion took place in New Delhi at the end of June.

The publications suggest that Poland’s image in India has improved over the last few years. The Consular Section of the Embassy of the Republic of Poland in New Delhi, named the friendliest consulate of all European countries, and the Polish Embassy in New Delhi and the Polish Institute, which support academic and cultural cooperation, take most credit for Poland’s improved image.

The book entitled India-Poland Relations in the 21st Century: Vistas for Future Cooperation is the result of a collaborative effort by the Polish Institute of International Affairs and the Indian Council of World Affairs (ICWA). The ICWA is considered the most renewed think-tank in India, preparing in-depth analyses and recommendations for the Indian government, and India’s vice president is traditionally the ICWA President. The book contains a chapter written by Poland’s Ambassador to India, Professor Piotr Kłodkowski, while India’s Ambassador to Poland, Monika Mohta, wrote the foreword.

The second publication entitled India in the Contemporary World: Polity, Economy and International Relations discusses India’s bilateral relations with the European Union and the EU’s image in India. It was written by the Centre for Contemporary India Research of the University of Warsaw in cooperation with foreign academic institutions. The Centre is the first and only such entity in Central Europe and one of four existing in Europe. The consortium now being formed comprises over fifteen renowned universities and research institutions in Europe and seven in India.

Photo © the Embassy of the Republic of Poland in New Delhi