﻿ Polish-German Outsourcing Forum in Szczecin | Link to Poland
Previous Next 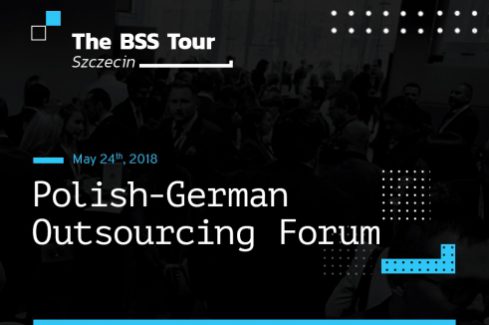 The BSS Tour Poland project inaugurated this year by the Pro Progressio Foundation is the second edition of substantive meetings of the outsourcing and modern business services industry.

The event is held under Link to Poland’s media patronage.

The first conference as part of the cycle took place in Krakow, and the attendance of participants was as high as 96%. The organization of events across the country is aimed at spreading the knowledge of the BPO / ITO / SSC sector, as well as strengthening ties with foreign partners.

An example of an international event is the Polish-German Outsourcing Forum in Szczecin. In the capital of Western Pomerania, the experts and potential investors from the western border of Poland will appear. Szczecin’s development capabilities are determined by the cross-border location, scientific potential, as well as availability of the office spaces and readiness to expand the international BPO/SSC and ITO structures as part of the neighbourly cooperation with Germany. The above-mentioned advantages of Szczecin encouraged the organizers to make the city an ideal meeting place for representatives of the outsourcing industry of both countries during the May’s Forum. The main theme of the event will be Poland as the BSS location open to cooperation with the German outsourcing market but also Germany as the Western European’s developed BSS location.

The Polish-German Outsourcing Forum in Szczecin will combine the conference element with international networking. The Forum is planned for one whole day, where main business talks will be run during presentations, discussion panels and mind-storm sessions. The aim of the event will be to strengthen economic ties between neighbours, as well as to show the City of Szczecin as a strong and strategic business partner for the German BPO / SSC / ITO sector.

The topics which will be discussed during the Forum include:

The conference will take place on May 24th, 2018 in the modern Mieczysław Karłowicz Philharmonic in Szczecin and is dedicated to the managers of BSS operational centres, as well as representatives of the investment development agencies of Poland and Germany. Among the speakers there are experts representing German Outsourcing Association, German Trade & Invest Agency, Polish Investment and Trade Agency and service suppliers from Poland and Germany. The event is planned for about 120 – 150 delegates, who, in addition to hearing the lecture, will have the opportunity to participate actively during Hard Talk, an innovative form of brainstorming session, which turned out to be a bull’s eye during the January’s Forum.

The Strategic Partner of the event is the City of Szczecin. Other organizations supporting the Szczecin’s Forum include Deutscher Outsourcing Verband, German Trade & Invest and Kinnarps. Media patronage for the Forum has been provided by: OutsourcingPortal.eu, Outsourcing & More, Emerging Europe, Outsourcing-Journal, Poland Today, Link to Poland, SSC Heroes and What’s Up Magazine.

Each conference organized by the Pro Progressio Foundation is supported by the proprietary Internet system – Event Tiger. It allows the event delegates to conveniently arrange a face to face meetings in a specifically designated networking areas during the event.

The Forum is free of charge to attend but the registration is mandatory.

A detailed program and application form are available at BSS Tour