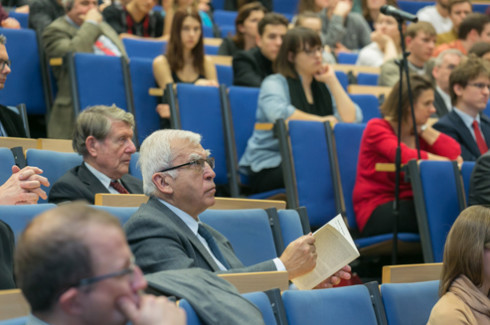 This year’s Bronisław Geremek’s Lecture took place on 18 November in the Auditorium of the Old Library of the University of Warsaw. The lecture was delivered by the former Prime Minister of Poland Włodzimierz Cimoszewicz. The title of the lecture was: Europe. Are we at a turning point?

The series of lectures was launched by Poland and the Netherlands in 2009 as a tribute to the achievements of Professor Bronisław Geremek and his contribution to the developing of the Polish-Dutch relations and promoting the European integration. The lectures are held alternately in the Netherlands and Poland, and partners for both Ministries of Foreign Affairs, are respectively Utrecht University and the University of Warsaw.

In the previous years outstanding personalities were the speakers – from the Dutch side: the former Minister of Foreign Affairs of the Kingdom of the Netherlands Bernard Bot (2010), former Prime Minister Wim Kok (2012), former NATO Secretary General Jaap de Hoop Scheffer (2014) and from  the Polish side: prof. Karol Modzelewski (2011) and Minister Adam Daniel Rotfeld (2013).

The Polish delegation present at the lecture was chaired by Undersecretary of State for Foreign Affairs Konrad Pawlik and the Dutch one by Director General for European Affairs in the Ministry of Foreign Affairs of the Kingdom of the Netherlands Robert de Groot. The lecture was also attended by the Rector of Warsaw University prof. Marcin Pałys and a representative of the University of Utrecht prof. Duco Hellema. The lecture was attended by the representatives of the diplomatic corps, politicians, media, academics and students.

Referring to recent events this year’s speaker, former Prime Minister of Poland Włodzimierz Cimoszewicz said: “… many times in the past the European community was in a difficult position but always, so far, it was able to deal with it …”.

The lecture was preceded by political consultations with the participation of the Undersecretary of State in the Ministry of Foreign Affairs Konrad Pawlik and the General Director in the European Ministry of Foreign Affairs of the Kingdom of the Netherlands Robert de Groot. The Netherlands is a close partner of Poland, both in the EU and NATO.  As the deputy head of Polish diplomacy has said, a common approach to many issues is reflected in the high dynamics of bilateral meetings at various levels and both today’s meetings are a good confirmation of it.

The consultations confirmed good relations between Poland and the Netherlands and joint intention to  intensify cooperation during the Dutch Presidency of the EU Council in the first half of 2016. The talks were, among others, devoted to the future of the EU and EU economic reform, migration crisis and preparations for the NATO Summit in Warsaw, as well as the development of bilateral relations.

Both events were part of the extensive Polish-Dutch cooperation, of which the Utrecht Conference is one of the elements. It is a permanent mechanism of annual bilateral consultations, which serves the deepening of cooperation between both countries in the field of EU policies.

Source: Embassy of the Republic of Poland in The Hague

Photo © Embassy of the Republic of Poland in The Hague /MFA