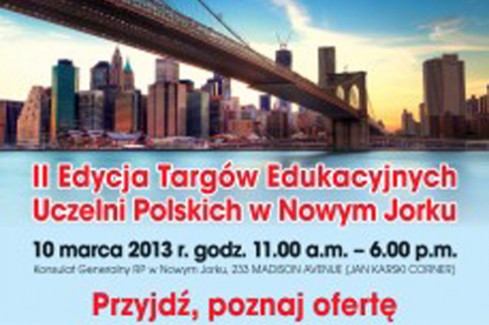 On Sunday, March 10th, 2013, from 10:00 am to 6:00 pm in the General Consulate of Poland in New York the second edition of the Fair of Polish Universities will be held. The fair will be attended by representatives of Polish universities, who will provide sufficient information on the terms and possibilities of studying in Poland. Fair is organized by the Polish Supplementary School Center in America, the Polish General Consulate in New York and the Manko Association

The report of the Ministry of Foreign Affairs shows that in the district of New York City live more than 3.6 million people who declare any relationship with Poland. The high cost of studying in the United States is the reason that young people of Polish origin look for alternatives.

The first Education Fair was held in New York in March 2012, on the initiative of the former Polish Consul for Polonia Mr. Przemysław Balcerzyk and Dr. Dorothy Andraki, President of the Polish Supplementary School Center in New York.

“During the discussions with students about collegeges, about the financial possibilities of their families, about their bilingualism, I realized they need information and assistance in completing the procedures. Therefore, the idea of an educational fair was born,” says Dr. Dorothy Andraka, one of the initiators of the first edition of the fair.

“Fair of Polish universities is organized due to the poor promotion of Polish universities and Poland abroad, as well as a huge population implosion, reflected in the education sector and tourism. Unfortunately, year after year assimilation of Poles with the Americans progresses. The aim of Education Fair is to encourage young American people of Polish origins to visit Poland and maintaine Polish identity. It is worth noticing that studies in the USA are very expensive, and Polish universities offer a high level of education and are much cheaper, that gives new prospects for children born outside Poland. ” – Says Lukasz Salwarowski, President of the Manko Association, one of the organizers of the project.

Fair is directed primarily to the young people of Polish origin who graduated from the American high schools.

During this year’s fair participants will have a chance to get introduced to a Polish universities offer, receive information about opportunities to study in English, forms of financing studies, the formal steps to be taken and the deadlines for submitting papers to study in Poland. This year novelty will be a competition concerning the most interesting offer.

Last year’s Fair attracted crowds, it is estimated that about 500 people participated in the workshops. This year organizers expect more than 1,000 participants.

The honorary patrons of the fair are: Ms. Ewa Junczyk-Ziomecka, General Consul of Poland in New York, and Mr. Marek Sowa, Marshal of the Malopolska