﻿ GoGreat: from Poland to Oxbridge | Link to Poland
Previous Next 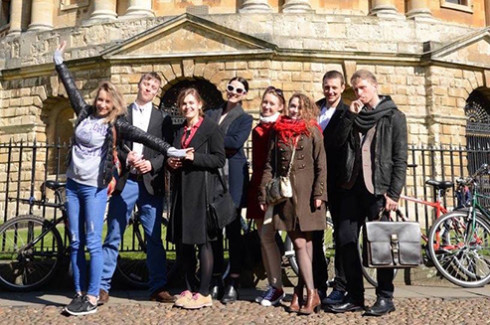 Cambridge and Oxford may seem a distant dream to many, even the most talented and ambitious, Polish students. An unfamiliar admission process, applications for financing, communication with future supervisors — all of these sound a bit daunting at first, but with some help from an experienced mentor this dream can become within your reach.

On 23rd-30th April 10 students from the Jagiellonian University in Cracow visited London, Oxford and Cambridge as a part of GoGreat, an access project organized by Polish student organizations in the UK.

The project’s aim was to present possibilities of developing one’s academic and professional career at one of the top UK universities. GoGreat participants visited four universities: UCL, LSE, Oxford and Cambridge, and at each of these institutions they were appointed with buddies — Polish students majoring in a subject of their interest. Those older students told their Jagiellonian University friends about the student life in the UK, both academic and personal, took them to labs and lecture halls, and showed them their favourite places on the campus. What is especially important, they also shared their knowledge about the graduate application process — different from the one at Polish universities. This one-week trip was packed with truly valuable activities to the last minute.

Business and social events were at the core of GoGreat. They included a meeting with the CEO of Asseco Poland, pub meetings with members of Polish student societies, a lecture about leadership delivered by Prime Minister Jan Krzysztof Bielecki, and traditional formal dinners both at Oxford and Cambridge.

The project was organised by students-volunteers associated in the Federation of Polish Students Societies in the UK, Oxford University Polish Society, Cambridge University Polish Society and the Jagiellonian University Students’ Association. It was supported by the Polish Academy of Arts and Sciences, which hosted the results ceremony, and generously sponsored by BCG in Poland and Asseco.

Photo © from the archive of Wojciech Jaworski