﻿ Next Step: Poland – Let’s meet in Cambridge | Link to Poland
Previous Next 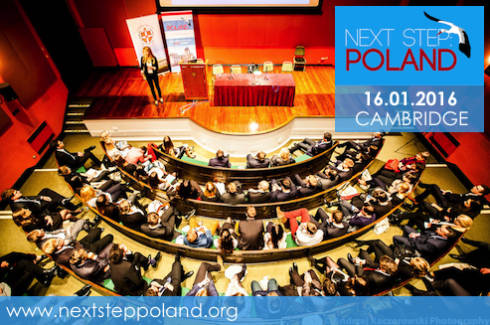 To study in Poland or abroad? To stay there or come back? We have to make choices all the time but sometimes one meeting can open completely new possibilities and help us make the decision. Such an event is definitely Next Step: Poland – a meeting of students from British universities and companies operating in Poland.

The Conference is held under Link to Poland’s media patronage.

Next Step: Poland is an event organised by students/volunteers associated in the Cambridge University Polish Society. Its aim is to present possibilities of developing one’s career and gaining professional experience in Poland to foreign and Polish students who continue their studies at the most prestigious universities in Great Britain.

The first edition of Next Step: Poland took place on 31 January 2015 in Cambridge, giving the opportunity to contact leading companies operating on the Polish market to more than 100 students. It involved such companies as Adamed Group, Uber, EY and Shell.

The second edition of Next Step: Poland is planned for 16 January 2016 at the Cambridge Union Society in Cambridge. The conference will be centred around the “Innovation in Business” topic.

During the event companies will have a chance to present themselves in panel discussions and lectures or by preparing an information stand.

An integral part of Next Step: Poland is also a series of 6-7 case study workshops organised by companies. They are not only a great opportunity to integrate and meet other participants but also to discover students’ predispositions and find potential interns or employees.

Maciej Mylik, a math student at the University of Oxford, took place in the workshops organised by Bain & Company during the first edition of Next Step: Poland. “Before coming to the conference I didn’t think about an internship and I had no idea what Bain&Company was doing – he says – During Next Step: Poland 2015 I took part in the workshops organised by B&C. My group performed best and this success motivated me to apply for an internship. My application was accepted and in the summer I started working at the company. It was a very good experience. If I was to consider going back and working in Poland, it would only be to work at B&C because I liked the company a lot.”

Karol Łukasik, an economy student at the University of Cambridge, took part in the first edition of Next Step: Poland in order to learn about internships offered in Poland. “I heard about internships at EY before but I didn’t come to the even thinking it was the company I would like to work for. During Next Step: Poland I had a chance to talk to EY’s representatives who convinced me to apply to the Audit Department. After some time I received an offer for a paid internship.” After the internship Karol was asked to take the position of the EY Ambassador in Cambridge which he gladly accepted.

On behalf of the organisers we would like to invite students and companies operating in Poland to attend the next edition of Next Step: Poland. Let’s meet on 16 January 2016 in Cambridge!

The conference is held under the patronage of the Embassy of the Republic of Poland in London and with support from Lesław A. Paga Foundation, Go 4 Poland, Cambrigde University Careers Service, Cambridge University Polish Studies,  Ivy Poland Foundation and Polish student associations at the most prestigious universities in the UK.