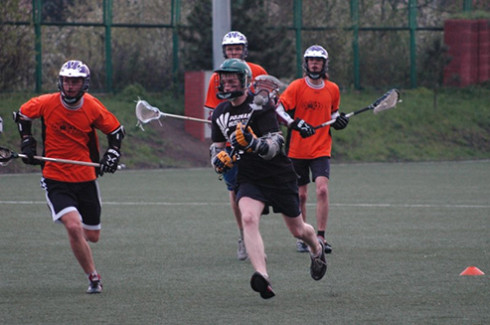 Lacrosse is a team sport that originated in North America. Indian tribes that practised this discipline used to call it the younger brother of war because lacrosse tournaments were treated as preparation for the battle, they were played in a huge area and they could last even a few days. This sport, by many considered the prototype of hockey, is the fastest developing discipline in the USA as well as Canada’s national sport. It is becoming more and more popular also in other parts of the world. Federation of International Lacrosse has recently welcomed its 51st member and it makes attempts to reintroduce lacrosse to the Olympic Games as it used to be 100 years ago.

The history of lacrosse in Poland goes back to 2007 and it is connected with two people: Tomasz Kędzia from Wrocław and Błażej Piotrowski from Poznań who brought it back from their travels around the world. Tomasz watched a lacrosse game for the first time in the Czech Republic and Błażej – while taking part in the Work&Travel programme in the USA. Both men quickly got in touch and they started working together on developing this discipline in Poland. They were given help by the European Lacrosse Federation, which funded basic equipment so both teams could start practising.

In December 2007 the first lacrosse club, the Hussars Team, was formed in Poznań. The Kosynierzy Team from Wrocław was set up in March 2008. The first game was played in April 2008 in Wrocław. The meeting ended with a tie (5:5). After the game the two oldest teams were joined with the new ones: Grom Warszawa, Kraków Knights (currently Kings) and Legion Katowice. At the moment there are 10 men’s lacrosse teams in Poland. Apart from the ones mentioned above, they include Ravens Łódź, Korsarze Trójmiasto, Ułani Lublin, Spartans Oświęcim and Opole Tomahawks. Women’s teams started to be formed in 2009 with the creation of the Kosynierki Team from Wrocław. In September the same year they were joined by the Sztorm team from Warsaw. The girls played their first game in May 2010 during the Silesia Cup in Wrocław. The following women’s teams were formed along with the men’s teams. In Poznań there is Poznań Hussars Ladies, in Gdańsk – Korsarki Trójmiasto, in Kraków – Queens, and in Katowice – Walkirie.

At the very beginning lacrosse in Poland attracted mainly people connected with the academic world. With time it started to change and at the moment we have both students as well as professionally active players. In nine years 20 pioneers from Poznań and Wrocław have been joined by nearly 500 people.

We are enthusiasts who treat lacrosse as something more than a way to spend an active afternoon. People connected with lacrosse have made this sport discipline a way of life. There are close and friendly relations between the players. We have created a kind of family, which, by working together, completely disinterestedly, is developing this amazing sport in Poland. Our group can be described in many different ways but if I was to choose only one description I would say: family. Unity, brotherhood, sacrifice, commitment and team spirit are our main values and everyone who has ever tried this sport Polish way understands how addictive this group of people is.

Thanks to the commitment and hard work we achieved our first successes after only a few years. For one season Poznań Hussars were successfully competing in the East German Lacrosse League. They also played in the Balkans three times, winning two gold and one silver medal in the tournament organised in Belgrade. At the same time Kosynierki and Kosynierzy Wrocław proudly represented us in the Czech leagues. Kosynierzy additionally won the international Silesia Cup. Grom Warszawa won silver medals at the tournament in Copenhagen and teams consisting of players from Polish clubs occupied high positions at the tournaments in Berlin and Budapest. The Polish Eagles Team is also doing better and better, taking part in box lacrosse tournaments. Also the women’s national team won the cup for the second place at the New Year’s Tournament in Budapest. Our greatest sports success so far is the participation of the Polish national team in the World Championship in Manchester in 2010 where we came 14th (among 28 teams). This was the best result among 10 national teams that played there for the first time. Equally or even more important things are happening with regards to organisation. Taking the opportunity and using the popularity of lacrosse in Wrocław, Kosynierki and Kosynierzy made the female version of this sports discipline introduced to the World Games that Wrocław will host in 2017. This event fits in with the activities undertaken by the Federation of International Lacrosse and makes lacrosse introduced to the Olympic Games more probable. In Poland it results in the possibility of receiving financial support from the Ministry of Sport and Tourism intended for preparing Polish national teams to this event. Thanks to the commitment of Beata Juchniewicz, Przemysław Tabor and Iga Sobolewska Polish female players have excellent conditions to play and develop.

Everywhere we go and play we meet Polish people who live abroad. The manager of the first Polish national team was an American of Polish descent, Robert Bieschke Jr. The team’s coach was Christian Zwickert, whose family on the mother’s side came from Poland, and the main defender is Christian Perzyński. The national team that played at the World Championship in Denver was supported by member of the Polish parish there. The women’s national team is being created with the help of Nicole Jermak from the USA and Richard Bos from Austria. The President of the Polish Lacrosse Federation, Marek Piękoś, lives in Chicago.

Where are we going?

Every year there are new people joining us and we put a lot of efforts in activating young people and introducing lacrosse to schools. We make long-term plans and thanks to our readiness to work these plans are achieved. At the moment we are one of the most dynamically growing sports disciplines in Poland and, what is more interesting, we are not done yet.

Our main priorities for the upcoming years include working with young people, growing both national leagues and developing both Polish national teams. This year the men’s team will have its debut at the European Championship in Budapest while the women’s team focuses on the preparations for the World Games 2017 in Wrocław and World Championships in Guildford.

© Lacrosse Polska – The World Championship in Manchester in 2010.

More information you can find on: Lacrosse Polska | FB